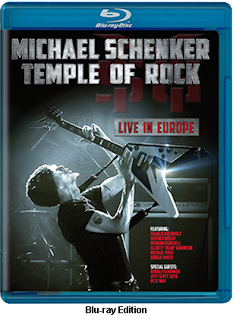 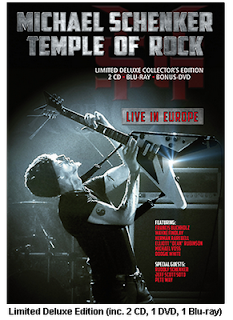 At the ripe age of 15, after a very early start in his professional music career recording his first album with the Scorpions and after joining UFO age 17, Michael Schenker focused exclusively on lead guitar and pure self-expression.
The second chapter in his career was focused on experimenting and developing his expertise on a more musical and personal level. With excellent musicians, friends and fans from all over the world, this live recording is part of this celebration.

Michael Schenker sees his music as a building block in the construction of the Temple Of Rock.
"The Temple Of Rock is almost finished," explains Michael Schenker. "The foundation was laid in the 60s by Led Zeppelin, Deep Purple, Black Sabbath, Jeff Beck, and Cream. In the late 70s, the pillars were then built by bands like UFO and AC/DC. By the 80s it was further reinforced by the likes of Judas Priest and the Scorpions, and many other influential rock bands.

"There's not much new left to expect, but I am glad to be a part of this temple,” says Michael. "It’s unbelievable fun and an honor to share a stage and make music with some of the world's best musicians."
A concert from Tilburg, the Netherlands was recorded in May 2012 that noticeably distinguishes itself from previous releases due to the line-up that includes Michael Schenker (lead guitar), Doogie White (vocals), Herman Rarebell (drums), Francis Buchholz (bass) and Wayne Findley (rhythm guitar, keyboards).

In addition to this Tilburg concert, fans can experience extracts from London's 2011 High Voltage Festival with Michael Voss (vocals), featuring awe-inspiring guest appearances from Schenker's friends and musical companions including his brother Rudolf Schenker (The Scorpions) who plays rhythm guitar on “Rock You Like a Hurricane”, “Hanging On” and “Doctor Doctor”, UFO’s Pete Way who plays bass guitar on “Doctor Doctor”, and vocalists Jeff Scott Soto (ex-Journey), and Doogie White, who jointly sing on “Doctor Doctor”.
All in all, there has never been such extensive and high quality material from Michael Schenker for your viewing and listening pleasure.