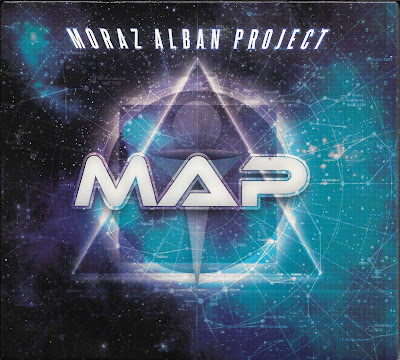 I got turned onto pianist / keyboardist Patrick Moraz via way of the progressive rock group, Yes, back in the nineteen seventies. Patrick was Rick Wakeman's replacement after he and the group parted company upon completion of the Tales From Topographic Oceans tour. 'Tales' as YesFans like to refer to it as, is a double studio album that consisted of four songs total. Introduced Alan White to the group. A replacement for Bill Bruford, who went off to King Crimson. Patrick comes in on Yes' next studio after 'Tales' was released entitled; Yes - Relayer (1974). Patrick's unique contributions, making this an "Uncle G" perfect rock album.

Yes' Relayer album had three musical compositions on it. The playing is outstanding! Loud and stimulating. Quiet and thought provoking. Think of it nowadays as pre Metal-Prog. Yes' hardest rock album to date. If needing one, an excellent example as to what a superior prog-rock album should should like. All five musicians involved were on top of their game. Recorded at the late Chris Squire's estate. Around the same time Chris did his masterpiece first solo record, Fish Out Of Water (1974), that BTW, Patrick also appears on.

Another album Patrick was involved with, and this was right before he joined Yes, is an absolute must have for every Prog-Head out there; Refugee - Refugee (March '74). Includes ex-Nice members bassist Lee Jackson and drummer Brian Davison. The first track off their self titled album was pure instrumental magic; Papillion. I imagine Patrick's fingers at times just flying up and down the keys. And then from one keyboard instrument, to another. All stacked up and capable of making any sound imaginable. There are songs like that on this new MAP release. Different people might dig more on different tracks. I'm seriously into keyboards, but I luv good drums and bass as well. This album has that. I like mostly upbeat music. This album has that.

The new Moraz Alban Project - MAP is in many ways samples of what I like best about listening to Patrick's music all these decades. The sounds blasting from my Sony Speakers, are vibrant, and demand attention. From the start of the CD to the last notes played. All nine songs. It's a 'Patrick Moraz' the fan base will recognize. A 'Patrick Moraz' people will stop, and listen to. A Swiss prog-rock piano / keyboardist / composer from the twenty century that's displaying via this new MAP release, just how it's done.

An instrumental that combines different elements of World Fusion, Rock, Jazz, and a sprinkle of ambient to create an enjoyable listening experience. Includes other musicians that come off sounding equally talented as Patrick at what they do.

A good example would be the co-header in this act, Greg Alban. An extraordinary drummer who at times on this CD, reminds me of both Bill Bruford, and Alan White. Perfectly timed rhythm capable of weaving in and out of Patrick's sound, without crashing into anything. In the past I was always amazed hearing Patrick play classical themed compositions. The rocker in me totally gets off by what he's capable of doing with a huge collection of electronic keyboards, and a competent drummer.

Dave VanSuch's saxophone work on the third track of the CD called 'Canyon Afternoon', is for those into the sounds of the sax, fucking unbelievable. I imagine Dave did his four minute solo, and then everyone else featured in the piece, finding ways of working around him. Speaks highly of Patrick to allow another musician of superior talent, play alongside him. The saxophone playing here triggers memories of the late Clarence Clemons (Bruce Springsteen E Street Band), and from television's Saturday Night Live, Lenny Pickett. Legendary sax players, the both of them.

Using the one to five star rating system, whereas one star means it's equally as bad as Donald Trump's hairstyle, to five stars meaning it's a must have recording to have for house parties, be that with sixty of your closest friends, or just that special someone (wink wink). Lite the candles and fire up the lava lamp. Uncle G gives Moraz Alban Project - MAP ... 5 stars! Seriously, I can't be any happier with this album. It's like taking everything you like about Patrick Moraz's keyboard playing, putting it in a blender, and out comes a solid forty-seven minutes worth of tunes. Give it a listen, and see what I mean.

For additional information on the Moraz Alban Project - MAP , including where to get and how to buy, we advise you to consult the following websites.