Everybody with a love of rock really needs to 'do a festival', there is nothing quite like sharing a day with folk who have diverse tastes and seeing a vast array of different styles or genres that might otherwise have passed you by. As a young person your average festival is a great adventure, rather like camping in the outback armed with your tent and sleeping bag you brave whatever nature can drop on you (not restricted to rain, many legged creatures and the odd stray farm animal which can all add to the fun).  Then at some point having wet rather interesting smelling clothes and a damp mushroomy bed loses some of its charm, so then you might drag a caravan down to the gig giving you back some semblance of civilisation and less chance of contracting trench foot or photosensitive dandruff. The madly esoteric even restore ancient camper vans for those few days of Nirvana (and supporting bands) gaining kudos for keeping  the spirit of the sixties alive armed or decorated with a sheaf of self adhesive vinyl printed flowers, retro gig 501's and Kaftans.
After 2006 the whole game changed with a little thing called "Hard Rock Hell"  at the end of the summer  festival season when bands were usually back on the road  the organisers decided to bring  the concept up to date adding that missing civilisation to the package. Nine years on in North Wales the Haven Holiday camp again plays host to the  festival,  which draws thousands of keen fans from across the UK and indeed much farther afield. There are options to how you can enjoy the spectacle ,you can of course stay off site in nearby Pwllheli which has some great hotels or you can 'bring your van' as there are some onsite pitches available.
Having tried the options I'd recommend for the full experience and ease of catching a nap between bands you want the onsite accommodation. There are apartments of various levels of luxury or the US style 'double wide' mobile homes. We've done this the last couple of years and  you can really appreciate the comfort of a hot shower after seven hours of scooting between bands, bars and bogs. None of that nasty three working but smelly toilets across the next field  it is all there on hand, with the  all bits you would expect at a proper concert venue plus a lot more.
This year we had a couple of days of decent weather broken by heavy rain and high winds but being a permanent site Haven is paved and unlike the traditional festival you are never going to step into sloppy pools of water mixed with sheep or cow poo.  Even the hardy souls who need the weed (tobacco obviously) have got shelter along the two halls and the long bar between has those huge umbrellas to keep the rain off. 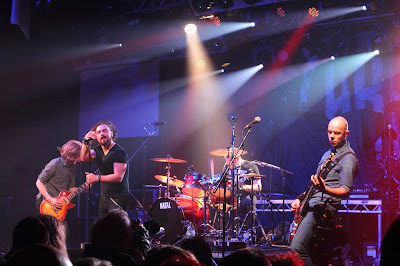 This years festival openers are a great bunch of guys from Northern Ireland  the Screaming Eagles,  they deservedly return each year to deliver their Ulster brand of  heavy duty rock. Now opening the first day is a big ask  for any band , because there is  a rush for a festival goers to get registered on site and settled in to your crib, so your band have to be a big draw to get audience in place . The proof  is this  audience know what HRH is all about, long before the sound check bodies were drifting into the hall, with a  lot of old friendships being renewed in the relative calm before Screaming Eagles crashed into town.  Behind the stage barrier a line of the keen pressed forward to get up close,meanwhile behind them were a happy crew headbanging and moshing away lost in the metal avalanche. Judging by the level and accuracy of the sing along a sizable contingent had taken the ferry over from Belfast where the band are regularly filling music venues like the Diamond Rock Club, most were clutching glasses of ale as they sang giving the atmosphere a great home from home boost. With front man Chris Fry welcoming and egging on the crowd to a great response  the day was clearly going to one to remember. Screaming Eagles sets have never disappointed and the day's was as good a performance as I remember.
As is the script with Hard Rock Hell once the music starts it is a roller coaster following on from the Screaming Eagles were Trucker Diablo a fellow Ulster band from Armagh shredding like crazy with breakneck metal riffage for a full set of crowd rocking songs. In fact we are lucky the band had a change of heart, just a year ago they were talking about taking an open ended break. Only the smart idea of a crowd funded album gave them the impetus to get back out on the road, thankful that they did. 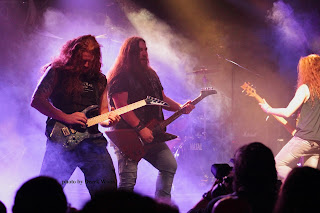 The stage barely got time to cool before the power rockers Attica Rage hit the bricks. Attica look a little  like the cast of Sons of Anarchy rocking that biker denim style. There is a level of loud rock which surpasses normal I get the clear impression Attica Rage are looking to Motorhead levels as inspiration and they are getting close, joking aside they do have a lot to offer for people who don't have a Harley sat on the driveway I won't try to capture their style but check out their official clip of "Ashamed" on You Tube which if there was any justice should be on rotation on VHS instead of the plastic bands that are. 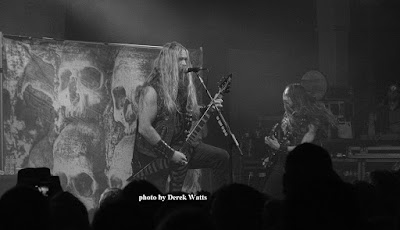 Headliners for the Thursday were Black Label Society , Zakk and the boys were rocking it large in their unmistakable style, it is not hard to see why Ozzy rates Zakk so high. He has the knack of teasing the audience with familiar songs given a full festival push with that bullseye V screaming while the mosh pit is bouncing in appreciation of a Wylde workout. 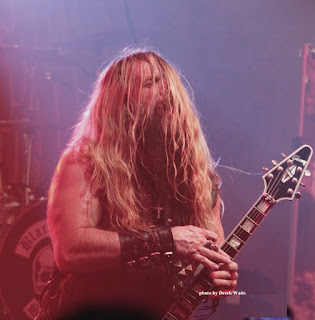 After some technical delays had put back the schedule the final band of the night was Massive Wagons. By now it was cracking 1 am you might think after the exertions of BLS the audience would be heading off for a deserved rest and I'd admit a few did but a lot more hit the bar up for a refill and then settled down for another set. I was talking to the band afterwards and they agreed that following BLS looked like they might be struggling , they had no need to worry as the spotlights picked them out there was a roar of approval. I've been getting nudged for a good year or more by a lot of people asking whether I'd seen Massive Wagons yet.  I should have listened they are majestic to keep an old rocker like me on his feet and relatively sober headed till the stacks get turned off takes a special performance. Once the photos were safe on the memory card I was kicking back with several hundred close friends in the audience rocking right to the end. I think I hit the pillow around 3am really I didn't care it had been a great day and I needed to sleep with two more packed days still to go. 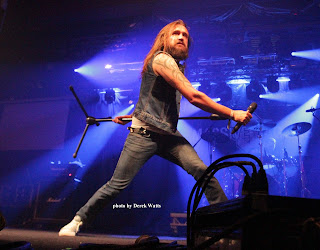