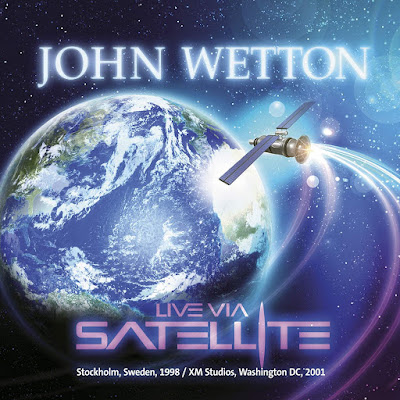 Straight up, John Wetton is a favorite musician of mine. Am sure I come pretty close to at least having half of everything that's listed on John's official discography. That's a lot of product by the way. Thing is, he never really disappoints. Is fairly consistent putting out one good record after another. Does not really venture that far off base from the music that he knows his fanbase is into. Displays musical integrity. A fellow human being that lives life sometimes on his sleeve. Winning personal fights with the bottle / health. Has been quoted saying he's lived 'an extraordinary life'. Here's two nights where he entertained / warmed the hearts of those there in person, and others tuning in via man made machines orbiting the Earth; artificial satellite. Enabling those who subscribed, a front row seat of crystal clear tones, beamed down from outer space, and into the comfort of their own cars / homes. The old hippie in me can't help but say; "Far out!"

If I had to describe John Wetton to a person who was totally unaware of any of his musical accomplishments, I would say he's an extremely well-versed rock musician. Introduced to me, compliments of Robert Fripp's art-rock band; King Crimson. Since that time I learned that John as a songwriter, knows how to pen a song worth hearing more than once. Has been a multi-instrumentalist / professional musician for several decades now. Considered a legend by those like myself, who are into music's progressive-rock scene. Has seen success in rock bands, and on his own, as this new archival double CD called, 'John Wetton - Live Via Satellite', demonstrates. If not a John Wetton fan before hearing either of these two live performances, one from the beginning of June in 1998, and the other four and a half years later, in December of 2002, then I predict you will become one. Especially if into music on a more serious level, and into all that makes everything tick. This guy does it all, including being a record producer. Speaking of which, this archival release, John Wetton - Live Via Satellite, is on his own label; Primary Purpose. Now, let's dig in.

About the release, John Wetton said: “Both of these shows are from the same time period, but come from very different sources. The first, a Circus tent-like venue in a funfair in Stockholm: the second, a state-of-the-art facility in Washington, DC, so the repertoire is similar, but venues could not be more different. Recording production is superb on both, it's a document of a slice of my life.”

A little background. The Swedish radio broadcast (previously unreleased) of John's appearance was believed lost in a fire. Luckly, a duplicate of the master tapes was found. Credited to a long and tireless search by John Wetton’s fans. I enjoyed hearing it for the first time, immensely. Repeat plays have been just as enjoyable. The setlist is solid! King Crimson fans, especially should be happy. A true reflection of John's musical journey, that leaves the Stockholm audience beyond satisfied.

I acquired a recording of this show, some time ago. Like disc one, it demonstrated that once the show starts, John Wetton immediately gets the attention of the audience, and does not let go till the last note is played. Their are some similarities as in the set list that appears on disc one. The same strong, giving it his all, performance. As John stated, the location of where performed, gives off a different vibe. So in my opinion, it's cool having the two performances. Besides, can one really have too many John Wetton concerts in their collection? His ability to play comes from the heart. The poetry / lyrics certainly stems from there. Not only is his ability to play a musical instrument impressive, but the words sung to accompany, have meaning, and depth to them. Lyrics that contain emotions I can't pretend to understand. Some about love, and others of heartbreak. Extremely well done. John's setlist a greatest hits, with songs that sold in the millions. More tracks demonstrating his participating in groups, than on his own. His solo music equally as well written / recorded. Two of my favorites; Battle Lines / Arkangel.

Using the one to five star rating system, whereas one star means it's rubbish, to five stars meaning you can spend what's left of your disposable income on it, I rate John Wetton - Live Via Satellite (2015) … 5 stars! Each disc deserves 5 stars as a matter of fact. If I had to pick a favorite, I dig the show from Sweden, the best. Again, I already had disc two in my collection. Disc one is fresh to me. Compliments disc two wonderfully.

For information on how to obtain this very fine live recording(s), please consult John's official website. That is: http://www.johnwetton.com/
Posted by Gary "Uncle G" Brown at 23:00