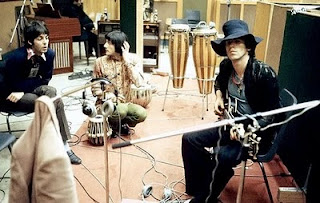 Whilst searching for other footage in a television company vault Gonzo Multimedia has unearthed some extremely rare footage of the Beatles and the Rolling Stones recording together in the late Sixties. The footage sees The Beatles and The Stones running through an extended song which eventually came out as two separate songs I’ve Got A Feeling and You Can’t Always get What You Want. Originally the song was I Got a Feeling You Can’t Always Get What You Want. After a disagreement over whether Phil Spector was going to produce the finished song the tape was spliced and each band went their separate ways to work on their respective songs. The footage was made by Yoko Ono who was there documenting the session and another film unit documenting her documenting the session.
The photo shows Paul McCartney with Keith Richards at the session.
It is hoped that the footage will get cleared for release later this year through Gonzo but a spokesman said this certainly is rare and no one would believe how good the footage is!
Posted by Jon Kirkman at 10:58