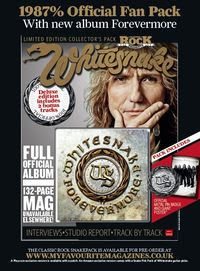 Right let’s get bone thing clear right from the start. Despite what some people have said regarding this album this is not Whitesnake straddling the two styles that make up the history of this band. I just cannot see the early incarnation of Whitesnake performing any of the material contained on Forevermore and that is not a bad thing either because to suggest so would mean that the band is stuck in the past and not moving forward. It is not re hashing the hair years either. No, this album is in my opinion a big improvement on the last Whitesnake album which I know Mr Coverdale personally likes but each to their own I say

What we have here in this rather fine Fan pack published by Future Publishing (who handle the publication of Classic Rock magazine and Classic Rock Presents Prog) is a bona fide return to the top for Whitesnake. I am as excited by this release as I was when 1987 came out all those years ago. David Coverdale has surrounded himself with a veritable bunch of pirates that play the back out of every single second of each song on this album. It has to be said that the song writing team of Coverdale and Aldridge is now bedding in rather nicely and with tracks like Steal Your Heart Away, Easier Said Than Done and Whipping Boy Blues we have a Whitesnake now that can bite!

What you also have here is an album of songs that can sit along the classics with no problem whatsoever. In fact there isn’t a song on this album that doesn’t sound like a Whitesnake song and that has not always been the way on previous albums in my opinion. Live however where these songs will make their mark and believe me you is will have the bite marks from these songs for some time. As a bonus we also have two tracks, Slide It In and Cheap and nasty from the forthcoming Live At Donnington 1990 DVD/CD package which will certainly wet the lips(No pun intended) of any self respecting Whitesnake fan

Thank God then after all David’s troubles and the rumours surrounding the problems with his voice that the rumours were untrue. On Forevermore he sounds better than ever and I for one am looking forward to the tour and this album will certainly be getting some heavy rotation on Classic Rock radio Stations.

I must also say well done Future because the accompanying magazine is a joy to read and fans will appreciate the extremely honest interview that features in this magazine. Interesting thoughts and stories surrounding the previous Whitesnake albums make this one Fan Pack worth investing in.
Posted by Jon Kirkman at 14:51