First Major Exhibition To Explore The Life Of Ringo Starr 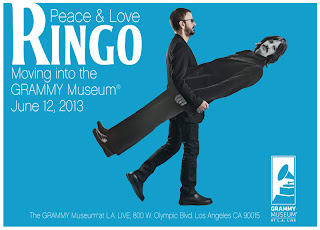 This one-of-a-kind, limited-run exhibit will offer visitors an unprecedented in-depth look at all aspects of Ringo's musical and creative life - as a musician, artist, actor, and as the man the world knows and loves simply as 'Ringo.'

It will also aim to propel Ringo's universal message of peace and love.
Ringo: Peace & Love is both the first major exhibit ever dedicated to a drummer and the first to explore the extraordinary career of the 7-time GRAMMY Award® winner.

The scope of exhibit spans Ringo's early life growing up in Liverpool, from Raving Texans turned Rory Storm, from The Beatles, to becoming a solo artist and then to the All Starrs with whom he is on tour now - this unique collection brings together diverse artifacts, rare and never before seen photographs, documents, personal letters and footage.
The exhibition will feature:
It will also be an interactive exhibit, where visitors can take a drum lesson with Ringo.
For more information visit the Ringo: Peace and Love Exhibition at The Grammy Museum
http://www.grammymuseum.org/interior.php?section=exhibits&page=ringo
Posted by Jon Kirkman at 20:11