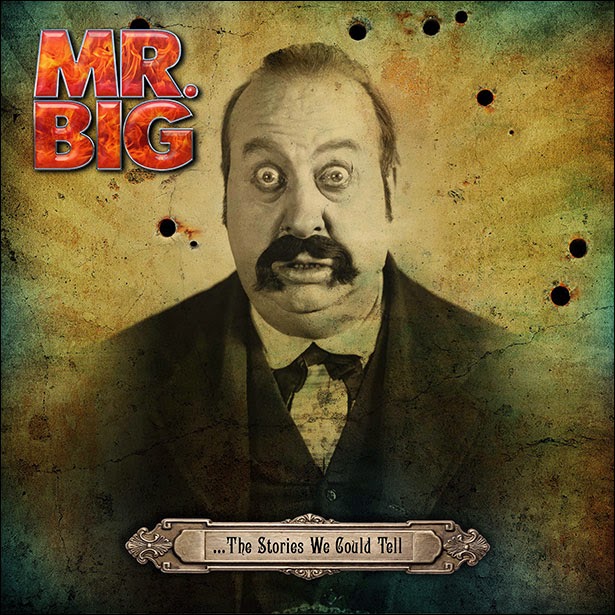 Hard rock’s original supergroup, Mr. Big are back with a vengeance with their new album "…The Stories We Could Tell." The band’s eighth studio album is slated for release in the UK on Monday 22nd September, followed by North American release on Tuesday 23rd September via Frontiers Music Srl.

"This new album rocks!” exclaims Paul Gilbert. “I love playing guitar, singing, and writing with Eric, Billy, and Pat. And after 25 years, I'm proud that we can make an album that is melodic, powerful, interesting, groovy, and emotional."

"We wrote songs individually and collectively on this new record," says Eric Martin. "To me this is the album that we’ve threatened to make decades ago. A classic, groovin', blues-rock record with the spirit and spark of our rock and soul idols from the 70’s. Hells to the yeah it’s a Mr. Big album complete with all the trimmings. I think whether you've been with us from the beginning or just starting, you’re going to dig where we are coming from and where we’ve been."


The original line-up comprised of Eric Martin (vocals), Paul Gilbert (guitar), Billy Sheehan (bass) and Pat Torpey ( drums), are back with some of their most powerful material to date. The new album is the follow-up to the 2011 release “What If,” that marked the band’s return to their signature hard rock sound.


Mr. Big got together this past June to begin recording at New Century Media and laid down the 13 new tracks in just a month. …Stories We Could Tell was produced, engineered and orchestrated by Pat Regan, known for his work with the likes of Deep Purple, Warrant and Keel. The album is currently available for pre-order via Amazon.


Mr. Big kick off their European tour on Friday October 17th at the Koko venue in London.
Visit www.mrbigsite.com to view all of Mr. Big’s 2014 tour dates. 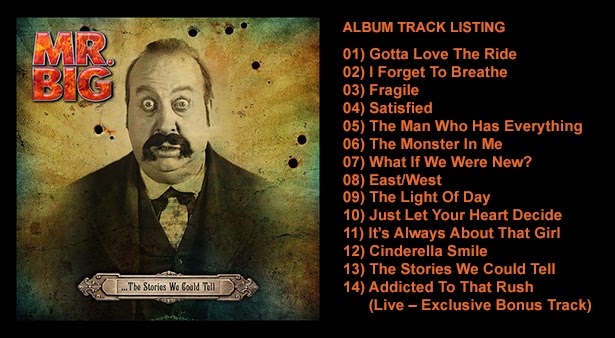 Mr. Big recently announced that drummer Pat Torpey has been diagnosed with Parkinson’s disease. The diagnosis has left him unable to perform his normal drumming duties on the band’s upcoming World Tour. He did complete all of the drumming on the upcoming album, but unfortunately touring will be too difficult for him at the present time.

Mr. Big intends to announce a drummer in the near future who will handle most of MR BIG’s drumming duties on the Fall 2014 tour and expects Torpey to jump on the drums on suitable live songs as well as participating in the group’s acoustic set.

Mr. Big formed in 1988 and immediately began to solidify their place in music history. By combining trademark "shredding" musicianship with awesome vocal harmonies, Mr. Big produced numerous hit songs that ranged across a wide array of rock genres – be it ballads, heavy metal, or blues rock. Their hits included “Alive and Kicking,” "Just Take My Heart" and the chart-topping ballad "To Be With You" (Billboard Hot 100 number one single in 15 countries for weeks, in 1991, propelling the band the band to huge international success and multi-platinum record sales).

Mr. Big continues to be a touring force with sold-out shows around the globe and with more dates to be announced in the near future.