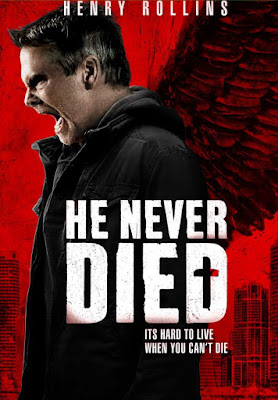 A brother from another Mother has recently recommended an independent comedy / horror B film to me called; He Never Died. First I heard of it. Was released to the masses just a short time ago. I quickly secured the disc via Netflix. Viewed the first time with a friend, not sure if I was going to actually do a write up, or not. My conclusion was it's a movie well worth watching. With that being the case, and seeing how I do write about my experiences watching movies from time to time, I'd feel bad after seeing it, and knowing how good a popcorn flick it is, by not saying at least nine hundred or so words about it. So let's begin.

Note: Popcorn was actually eaten during this reviewers second viewing of this motion picture.

This fairly new adult aimed comedy / horror motion picture, comes to us courtesy of writer and director; Jason Krawczyk. Did an excellent job in both storytelling, and presentation. A fresh approach to an old subject matter.

To start I'll just come right out and say that the main character in 'He Never Died' is a monster. A middle aged white man who regularly drinks human blood, and eats human flesh. This of course would qualify him to be a cannibal. Which also in my mind, categorizes him a monster. A tortured soul who, try as he might, just can't seem to be at peace with himself. Trying to curb his natural instincts so to protect himself and those around him, he buys stolen human blood to consume, out of the trunk of someone's car.

Our main character is wealthy, even when dressed poorly, and living in a rundown boarding house. Withdrawn from society, and thusly keeping a low profile. Life is down to a science of control, and maintain. Besides drinking packaged human blood when needed, the cannibalistic insomniac, who by the way is named Jack (played by Henry Rollins), occupies his free time by going to Bingo, and a greasy spoon / diner where one of the waitresses, portrayed by Kate Greenhouse, has a crush on him. It is what it is, that is until one day when a series of unplanned events occur. Capped with finding out he's a father. Jack's boring / controlled life is about to fall apart at the seams. This is when things get really interesting.

Jack's young adult daughter Andrea, ends up being a very cute train wreck. A heavy drinker / borderline alcoholic who because of the drinking, tends to get herself into trouble regularly. Jack knew nothing of Andrea's existence until this very day. To say she's a handful, would be an understatement. The young ladies' mother, Jack's ex, a woman he barely knows and also has not heard from in almost two decades. Leaving his crappy digs, it don't take long before Jack finds his blood daughter unharmed. She's held up in a motel with a middle age man. Together Jack and her leave, each not really knowing each other. Blood strangers. Because Jack don't have an automobile, it's off they go on foot getting better acquainted. Later on in the film, Jack will have to search for her again. That's after the mobsters have entered into the equation.

I did say this was a comedy / horror film. The dialogue and events depicted did at various times make me laugh. The horror comes in various shapes and sizes. The violence is more comic book. For those with weak tummy's, things can get pretty gross. Written more so I believe for adults, than teens. The humor can be dry, and not so much in your face. I believe the brighter of the teen bunch will zoom in on it.

Best Dialogue: Jack inquires to his daughter how is it she can get inebriated without having any money. Her answer; "A vagina is like a coupon-book for alcohol".

Using the star rating system, whereas one star means it was a waste of money making, to ten stars, meaning it's safe for YOU to send your hard earned (I assume) cash on, Uncle G rates Jason Krawczyk's He Never Died … 10 Stars! I could not have done any better myself. That is if I knew how to make a real motion picture. Saying that, I sure have seen a shitload of movies in my life. This is an entertaining, well made film. The story makes you think some, instead of what's unfolding being obvious. No dead spots / needless scenes. Managed to keep my attention from the start, to finish. Contains believable acting. I have my favorite cast members. The star, Henry Rollins, of course. The two main ladies in the film; Jordan Todosey as Andrea, and Kate Greenhouse as Cara. And actor Booboo Stewart, who portrays Jeremy. 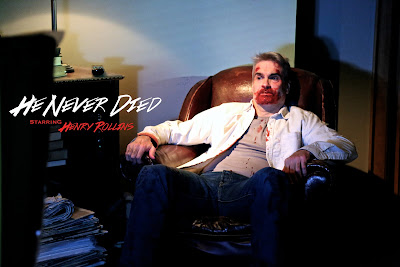 He Never Died, a cleverly written / well made theatrical B Indie Movie masterpiece, that makes one hour and thirty nine minutes, fly right by.

Note: It was announced that Jack's story will be explored more in a mini-series for television, that is said to be in the development stages. Actor Henry Rollins will reprise his role as, Jack. Should be cool.