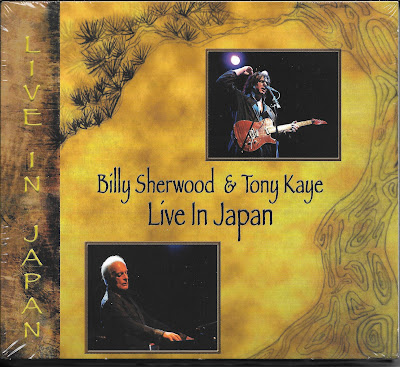 Released this past April, Billy Sherwood & Tony Kaye - Live In Japan, is a two CD plus DVD deluxe edition recorded five years ago while on tour, that completely caught me by surprise. Eighteen tracks that does any excellent job featuring songs from both of their careers.

Tony Kaye is best known for being a co-founding member in the progressive rock band; Yes. Every day on classic rock stations all over the world, one can hear Tony's keyboard work on such outstanding Yes songs as; I Seen All Good People, Time And A Word, Yours In No Disgrace, Starship Trooper, It Can Happen, Love Will Find A Way, Hold On, and the number one YesSmash, Owner of a Lonely Heart. Just to name a few. From there Tony was in the British rock band, Badger. I play their live album, One Live Badger (1973), even since purchasing back in the 1990's as an import (compact disc). Add to that, Mr. Kaye's is also a co-founding member with the modern prog-rock recording group, Circa:, a group where we also find the second half of this performing duo that I'm currently writing about, Billy Sherwood. Released their debut release back in 2007. A new studio release is on the horizon by the way. Described by Billy as; "Super-proggy." Be sure to look for that.

I first got to know Billy Sherwood back when he was playing with Yes, the first time around. A protege of the late and great Yes player, Chris Squire (1948-2015). Billy's work with Yes could be found as a player, or behind the scenes (studio), on several Yes projects. The guy really is amazing. A multi-instrumentalist, and singer. Others bands he was in include Lodgic, World Trade, Yoso, and the already mentioned Circa: which has a history of very cool drummers; Alan White (drummer:John Lennon_Yes), and Jay Schellen (drummer:Asia_GPS). Currently behind the Circa: drum kit, is Scott Connor, who played on what could be called William Shatner's best music CD; Ponder The Mystery (2013).

Talk about deep cuts. Billy Sherwood & Tony Kaye - Live In Japan is full of them. As a YesRelated collector, I am literally blown away by these in concert performances. A simply MUST HAVE for everyone like myself, who not only collects YesMusic, but also anything else a Yes member, past or present participates in. Something I been doing for several decades now. Not that I have everything, because that would be super hard to do, and frankly would cost a fortune. Example, pertaining just to Billy Sherwood, that would mean having all his solo records, guest spots on other albums, plus, and this is a BIG one, everything he produced or did studio work on over the years. Including all those tribute albums he participated on, in which I lost count there is so many. My all time favorite, and it's really a Paul Rodgers solo record; Muddy Water Blues - A Tribute To Muddy Waters (1993).

Japan in the year 2011, was trying to recover one of the biggest earthquakes ever recorded, as well as a tsunami, which devastated parts of the country. Over fifteen thousand people died. Over six thousand injured, and more than twenty five hundred missing, according to 2014 statistics. In it's wake, armed with pre-recorded drums and bass tracks that Billy Sherwood recorded himself, both Mr. Sherwood and Tony Kaye toured Japan, entertaining all those who were lucky enough to be able to attend. The show itself, close to two hours. Songs included tracks from Yes, Circa:, and a healthy dose of titles from work Billy did with Chris Squire, and his own solo material. Part of the show also is a wonderful as always, Tony Kaye keyboard solo. I'll elaborate on that more before I'm finished.

Any material originating from the two records (Chris Squire_Billy Sherwood - Conspiracy + Conspiracy - Unknown) Billy did with Chris Squire, are just special to me. The double CD Billy Sherwood & Tony Kaye - Live In Japan release, includes several songs from Billy and Chris' time together. This here alone is worth the price of admission. Not only due to the performance, which are pretty true to the original recordings, but also because they are songs that unless already a fan and playing the CD's on a regular basis, that you just don't hear everyday. One song would be a bonus track on the first release they did (Chris Squire_Billy Sherwood - Conspiracy) called, Say Goodbye. A tune that actually originates from A band Billy is in; World Trade. The track appears on their 1995 album; World Trade - Euphoria. There are other Chris Squire - Billy Sherwood / Conspiracy numbers also included; Confess, I Could, and Red Light Ahead.

Did you know Billy helped write a Toto song? He sure did. It could be found on Toto's eighth album; Kingdom Of Desire (1992). This was the last album Toto drummer Jeff Porcaro participated in, before his untimely death at age thirty eight. So sad to have died that young. The tune entitled, The Other Side, could be found on the second disc of this two CD / DVD deluxe edition.

Billy Sherwood's solo material I always find very well done. Intricate in nature. Musically, I'm always impressed, due to Billy himself at most times playing every instrument heard. He's as talented a drummer, as he is a guitar or bass player. I'm trying to learn keyboards myself, and getting nowhere fast. A lot of dedication involved. Billy's devoted his life to music, and one can tell. Besides the musicianship, Billy's singing stands out as does the lyrics, in which a lot of times, Billy tackles heavy / serious subject matter. From the Japan live shows with Tony, we get two solo Billy Sherwood tracks, both from the same 2003 release; Billy Sherwood - No Comment. The two songs make for a solid representation of what Billy is capable of doing when away from a group setting.

Speaking of, I save the two biggest bands Billy is in, for last. Both also having co-founding member Tony Kaye in them.

Circa: On the first disc of this two audio disc / one DVD collection are a couple Circa: numbers; Together We Are / Cut The Ties. Both tracks from Circa: debut 2007 release.

Yes: Eight songs from Yes' vast catalog. Some instantly recognizable, and a few of them, songs that Yes themselves rarely do themselves live anymore, if at all. One that really stands out is a track off the band's 1993 album Talk; I Am Waiting. Performed by Sherwood & Kaye as an instrumental.

Another track that makes this release a must have for the YesHeads out there. I was surprised how much I liked 'Owner of a Lonely Heart', with Billy's vocals. He's no where the alto tenor the main vocalist on that hit, Jon Anderson is. Yet, along with Tony's key's and Billy's instrumentation, the duo does a version that is just as delightful as the original Top 40 composition.

Two Yes songs that could be labeled deep cuts, can also be heard on this Billy Sherwood & Tony Kate live collaboration. From Yes' 1991 Union album, a track Chris Squire / Billy Sherwood penned together called, The More We Live - Let Go, and from 1997's Yes - Open Your Eyes; No Way We Can Lose. Both presentations are a breath of fresh air, and surprised me when I played this CD, the first time around. As a matter of fact, and probably due to 'Open Your Eyes' not really being a favorite Yes album of mine, I recognized the 'Open Your Eyes' number, but could not identify it, immediately. Had to research, and actually was not really shocked I didn't know it right away, coming from the seventeenth Yes studio album. I favor about half the tracks from that album, along with the cool hidden track that Billy put together. In my opinion, 'Open Your Eyes' would have been a far better release, if the length wasn't so long, eliminating several of the tracks that's I feel appears more as filler, than actual substance.

Tony Kaye Solo: My first time witnessing a Tony Kaye keyboard solo was back when I saw a YesShow from the band's 90125 tour. Every note / chord played counted. Nothing excessive! Been that way with every solo I heard Tony play after that. The same goes for his portion of the show here. Listen up, and you'll recognize in the almost four minutes that he plays other numbers from Yes' 90125 that Sherwood and Kaye don't perform; Hearts and Changes.

The DVD: Songs performed are the same as the two CD audio track listing, but also has some cool behind the scenes footage that come from the tour. I wish the visual quality was better. Back in the nineteen seventies there were those who believed rock n' roll concerts were not worth filming. Mainly due to the lighting. Bullshit for the most part. Though unfortunately that might apply here. Add the fact I'm spoiled by an army of high definition camera's filming live events nowadays, and having a budget that could feed a third world nation, in which I'm guessing this production, didn't have. Seeing the DVD as a bonus disc, the audio is very good, and I'm certainly not going to hold the lack of quality in a visual sense, against it when rating. And speaking of which...

Using the five star rating system, whereas one star means one can totally ignore it, to five stars which means one should be asking themselves where they can buy it, Uncle G rates Billy Sherwood & Tony Kaye - Live In Japan (Deluxe Edition) … 5 stars! Pointing out the obvious, anyone reading this could have guessed what I would rate it, just by reading the first few paragraphs. No surprise really. Still, needed to make it official. I'm real happy adding Billy Sherwood & Tony Kaye - Live In Japan (Deluxe Edition), to my already fairly large, YesRelated collection. I strongly recommend to new listeners as well. The music these guys have involved themselves with over the years, make Billy Sherwood & Tony Kaye some of the best players in the prog-rock scene. Really hard to go wrong with anything these two gentlemen do musically.

And CONGRATS to Tony Kaye, for we now have an album with your name right on it, and not a group you belong to. Worth noting!

Note: This review, can also be found via the WordPress website, on the 'Gary "Uncle G' Brown Archives Page: https://garyunclegbrownarchives.wordpress.com/2016/06/05/uncle-g-reviews-billy-sherwood-tony-kaye-live-in-japan/
Posted by Gary "Uncle G" Brown at 20:14