The odd spelling of 'The Witch' jumped out at me first; The VVitch. Followed by the subtitle; A New England Folktale. It certainly catches the eye, which I'm sure it was intended to do. I actually passed on this movie when first seeing it offered on Netflix, and then did so a few more times, before finally deciding to give it a go. After the third or fourth pass but continuing to notice the film's poster, I figured what the hell. And also, Netflix's summary sparked an interest. The story itself, takes place in the 17th century. After all, I am on record as saying I do like historical period pieces. It was also categorized, an indie horror movie, and as anyone knows who read my movie reviews before, know I also dig independent B horror films. Sometimes having less money, means the ones involved try harder. Doing more with less. Two quick examples; John Carpenter's Halloween / Sam Raimi's Evil Dead.

Opening up another browser, I decided to do a little more research before committing to the selection. I found out the film was released at the 2015 Sundance Film Festival (Winner: Best Director), and then made available to the masses, the beginning of this year. Is said to have cost about three million to make, and up to this point, grossed over thirteen times that according to the website, Box Office Mojo. Out on disc a couple months ago. Putting everything together, 'The Witch' certainly met my criteria. Added it to my Netflix queue, and before I knew it, the Blu-ray was in my snail mailbox. That evening, having some candy and a cold drink, I watched the previews that were also on the Blu-ray, and then settled in to view the main feature. 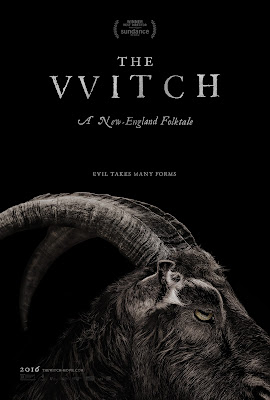 The story starts showing a family in a courtroom like setting, being banished from the Puritan colony, in which they were making a home. Possibly, a difference of opinion. The next scene shows a beat up horse and carriage departing the settlement and venturing off to parts unknown. Inside, a middle aged man of strict religious beliefs, his wife, their four children of various ages, and all their earthly belongings. Off they went, heading deep into the forest to find themselves a new place to call home. Upon finding land that the elders believe will suffice their needs, they settle in, building a home and farm in the process. At first, it appears to be the ideal life. The couple has another child. But all is not what it seems to be. For sharing the same woods as them, is a witch. The nastiest of it's kind. The newborn disappears. Their harvest is deemed worthless. An older child after going missing, returns naked and evidently bewitched. These chain of events, have the otherwise tight knit family unit, question their own past actions, and what children that are left, accuse each other of wickedness. And all while this is going on, they had best keep an eye on their outside critters. For one especially is keeping an eye on them.

I conclude after seeing 'The Witch' that it was superbly written and directed. All by one man, Robert Eggers. Unbelievably, his first time receiving director's credit. The man hit a home run! Besides a well written story, 'The Witch' is spot on regarding its verbal and visual authenticity. And as for the horror aspects of it, I can say that what's brought forth on the screen is capable of sending shivers of terror down the spine of many. Frankly, I was not expecting a movie of such high quality. One would think it launched Mr. Eggers and all those associated career's, well into Hollywood's stratosphere.

Using the same rating system as the IMDb website uses whereas one star means it's horrible, to ten stars which signals it being the best possibly created, I give the indie motion picture The VVitch - A New-England Folktale … 10 stars! Regarding the actors, the one portraying the family, especially deserve high praise. And a tip of the hat for those behind the costumes. The sets as well. A well done job indeed! Count me as as to being a new follower of writer / director Robert Eggers. His solid script, and a vision as to how it should be filmed, clinched my regard as to The VVitch - A New-England Folktale, being a motion picture that if a fan of these type films, simply shouldn't be missed.

Blu-Ray: Includes very good bonus features, including a documentary called, "The Witch: A Primitive Tale", which acts as a behind the scenes / making of the film, and also a very informative half hour Question and Answer Session with experts from the time period (1700's), plus the writer / director, and one of it's stars, the very beautiful and talented, Anya Taylor-Joy.