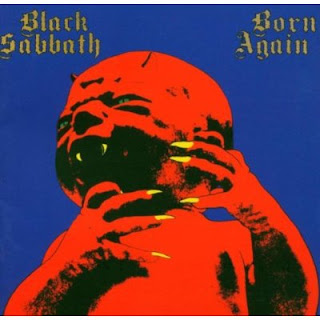 When Born again turned up in 1983 I wasn’t sure whether I was more surprised that Ian Gillan had joined Black Sabbath or that they had actually managed to get it together enough to record an album. Of course there was the thought at the back of my mind that a large amount of money was involved and I am sure that the band when they headed off for a year long tour made quite a bit of it. I have to say I was pleasantly surprised when I listened to the album however and in fact over the years I think Born Again has proved its worth as part of the Black Sabbath catalogue.

Gillan actually proved himself a very good member of Sabbath and Born Again is a really good album. Of course whether the Black Sabbath fan of old considers this is a debateable point. It cannot be denied however that Born Again is an extremely good rock album and there are some fine riffs from Tony Iommi throughout the album. Another good sign was that founder member and drummer Bill Ward was once again behind the drums although sadly by the time of the Reading Festival appearance which is featured as part of this package his place had been taken by former Electric Light Orchestra drummer Bev Bevan

In terms of material Born Again features some key songs including Disturbing The Priest, Thrashed and Zero the Hero with the latter being one of Iommi’s great riffs and one he occasionally revisited over subsequent years as part of his solo or worked into other songs in a live setting.

I think the problem for most Black Sabbath fans is that it was a former member of deep Purple that had joined and fans of bands can be extremely partisan at times. Of course for the Sabbath fan base it was only going to get worse with various singers coming and going over the next few years including another former Deep Purple man Glenn Hughes.

No Matter this deluxe edition of Born Again is a welcome release containing what in hindsight is a very solid album which has been fleshed out by two previously unreleased tracks the extended Stonehenge and an album session outtake The Fallen.

I do remember listening to the broadcast live from the Reading Festival in 1983 which now makes up the second disc of this set and was quite happy until the band launched into Smoke On the Water. Obviously because Gillan was in the band but to be honest IO don’t think Sabbath needed to perform this track. After all Gillan had joined Sabbath rather than the other way round So I would have preferred to hear another Ozzy era track perhaps or even a Ronnie James Dio era track but no mater it is carved in stone now to take its place in history.

Generally speaking this Deluxe Edition of Born Again is a worthy release and certainly one that I have enjoyed. The sleeve notes are interesting as well with Steve “Krusher” Joule explaining how he came up with the idea for the cover and also how initially he didn’t really want to do the job and conspired to do such a bad job that he wouldn’t get the commission; strange but true.

All this goes to make up the story of Born Again which seen with the hindsight of almost thirty years is an interesting chapter in the long and involved history of Black Sabbath
Posted by Jon Kirkman at 10:37