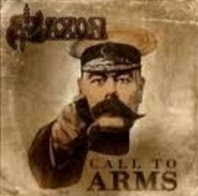 For more years than I care to remember Saxon has been delivering excellent rock albums to a rather large fan base. Of course the critics do like to take the Mickey out of Saxon presenting them sometimes as some sort of cartoon band. Wholly incorrect and while it must irk Biff and the boys that at least in certain parts of the press they get no respect the band has a massive worldwide following who not only buy the albums but turn up at the concerts too. Long may this continue and while the band continue to release albums of a high standard then I can’t see why that shouldn’t be the case.


Call To Arms is the latest album to come from Biff Byford and the men of Saxon on their own Militia Guard label and a rather fine album it is too. No messing about for Saxon they just get right on with the job in hand and the album opener starts things off the way they mean to continue with Hammer of The Gods possibly an obvious title for a Saxon song but hey if it ain’t broke then don’t fix it.

Saxon do what they do extremely well and are probably the embodiment of British heavy metal these days and call To Arms is an album packed to bursting point with extremely good examples of the genre. Other highlights include Back in ’79, Surviving The Odds and The Working Man all of which are applicable to Saxon. There is even a reprise of the title track in orchestrated form at the end of the album making for a majestic end to what I think is the bands 19th album.

That the band have continued under the leadership of Biff Byford and maintained a true course is admirable and this album really should fit the bill for the still massive Saxon fan base. So many of the songs here will also sound great in a live setting and I for one see these songs fitting in so well alongside other Saxon classics

Respect where it is due you know you are going to get an album that the band believe in when Saxon deliver a new release and Call To Arms is certainly another great album from the band and one that will almost definitely do good business both across the counter or however you decide to purchase the album; just buy it you won’t be disappointed!
Posted by Jon Kirkman at 13:18