Gary Wright :The Dreamweaver In Conversation With Jon Kirkman on Classic Rock Radio 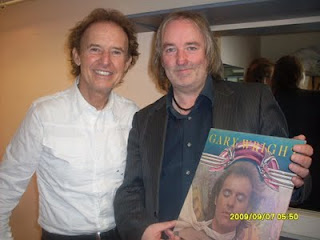 Gary Wright has been a mainstay on the music scene for more than forty years both with the band Spooky Tooth and Wonderwheel and as a solo perfromer. In 1975 he released an album that would become the biggest of his career; Dream Weaver.

In 2011 Gary is on tour in Europe with the Ringo Starr All Starr Band.
Classic Rock radio's Jon Kirkman spoke to Gary Wright Backstage at the Liverpool Empire on the All Starr Band's current tour. gary talked about Spooky Tooth his time working with both George Harrison and Ringo Starr and of course Dream Weaver and his new album Connected

The feature goes out at
11am,8pm and 4am UK time Wednesday 29th June Thursday 30th June and Friday and Friday 1st July.

http://www.thedreamweaver.com/
Posted by Jon Kirkman at 13:57