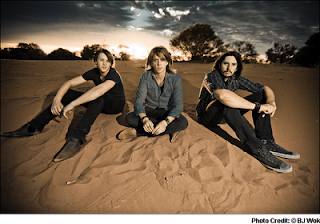 
‘Too Much’, described as an exploding fireball of kinetic stoner rock energy, is also available as a FREE MP3 download from Soundcloud here –

http://snd.sc/qmACkA
Hailing from Adelaide, Southern Australia, TRACER will be in the UK in October as special guest on Royal Republic’s “We Are The Royal” European tour. The UK leg kicks off at the Sheffield Corporation on Monday October 24th.
Tracer release their latest album Spaces In Between in the UK on the 3rd of October
Posted by Jon Kirkman at 10:40

Email ThisBlogThis!Share to TwitterShare to FacebookShare to Pinterest
Labels: Spaces In Between, Too Much, Tracer