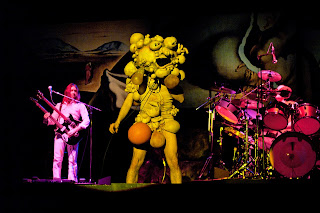 Mean Fiddler proudly presents two special performances by The Musical Box, who bring their acclaimed reproduction of Genesis’ most loved album, “The Lamb Lies Down On Broadway”, to Manchester and London.

The Musical Box are the only band in the world given performing rights by Peter Gabriel and Genesis, plus exclusive access to archives, audio tracks and original slideshow for “The Lamb Lies Down On Broadway“, re-staged 25 years later in painstaking detail.

The show has been produced in some of the most prestigious venue in the world, including London’s Royal Albert Hall and the Paris’ Olympia. In 2005, Phil Collins joined the band on stage in Geneva. Collins says about the show “I watched and listened. They played that stuff better than we ever did.”

The band are playing just two concerts and these concerts are expected to sell out so you are advised to book your tickets early.

In 2000, The Musical Box received a licence from Genesis and Peter Gabriel for the reproduction of The Lamb Lies Down on Broadway. No other band has ever obtained these rights. Masks, costumes, make-up, accessories, sets, lights, special effects, choreography and staging of the show were all recreated with meticulous precision. Costumes – including The Slipperman – required nearly 2 months of work, each detail being scrupulously reproduced by hand.

As for the music and sound, The Musical Box used the same instruments and equipment Genesis did for the original album, even down to the acquisition of a Micro-Fret 6 string bass. Genesis also supplied the 1120 slides used during the original 1974 tour.


The Two British Concert Dates Are Below

Email ThisBlogThis!Share to TwitterShare to FacebookShare to Pinterest
Labels: Genesis, The lamb Lies Down On Broadway, The Musical Box