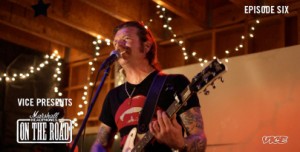 The Californian desert is not just the best place on the planet for partying, but it is
also a delicious place to get creative. “ Jesse Hughes London, (27th October 2011) -
Today VICE and Marshall Headphones premieres episode six of On the Road – the epic documentary series that celebrates what ultimately rock n roll is about – the roadies.

In the final episodes of Jesse’s incredible journey, he heads out to the Joshua Tree and
Rancho de la Luna, a mystical place and spiritual home for musicians to come to
record, play and write. The episode pays tribute to the ranch, which has seen some of
the true greats of music, with the likes of the Arctic Monkeys, Queens of the Stone Age,
U2, and PJ Harvey all jamming there. Jesse takes a tour of the compound with his best
friend and fellow Eagles of Death Metal man Dave Catching, and we see this isn’t just a
recording studio, but home to some amazing figures behind the rock ‘n’ roll scene.
Jesse also chats to chief engineer of Eagles of the Death Metal, John, about how he got
into the world of rock, and what his craziest experiences have been. The final episode
concludes with an impromptu secret gig by Eagles of Death Metal at an all night desert
party.

To watch the sixth episode of Marshall Headphones on the Road go to VICE.com
On the Road, is a twelve part documentary series produced by VICE and Marshall
Headphones. Presented by Jesse Hughes for the first six episodes and Tim Harrington
for the next, On the Road celebrates the travelling rock ‘n’ roll lifestyle playing tribute
to the unsung, behind-the-scenes heroes that make the gigs happen.