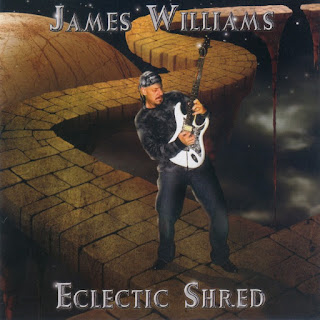 Being in Houston, I sooner or later find out about good local or state talent. Monte Montgomery comes to mind. Excellent guitarist who rocks while preferring the more acoustic side of things. And a new one to add to the list,

out of Plano Texas, is James Williams. Not only an excellent guitarist, but a multi-instrumentalist. Dude nails everything he touches. Was raised in a musical household. Devoted his life to, and it shows. My first time hearing of him.

I get this CD in the mail: James Williams - Eclectic Shred (2012 Eclectic Shred Records). From the first second I put it in the home stereo and pressed play, I was absolutely amazed. Even more so when hearing them with my Sennheiser head phones on.

Hate to categorize, but so the reader can imagine what kind of music we got going on here, I'll label this sound metal prog. A lot of speed pickin', up tempo hard rocking sounding stuff. Not all are like that though. Representing the prog side is more than one slower-paced styled tunes. By the time the CD is finished playing, your mind will be blown. Especially if you read the credits. Just about everything you heard is one man. By himself, he's playing music in the same ballpark as Planet X. Uncle G does not say that lightly. It's seriously that good. I'd say something stupid like I'll refund your money if you don't like the CD, but music is personal taste. For those who read my column everyday, y'all should know a bit about my musical likings by now. I should have proven myself by now. Odds are their is something to it when I recommend checking something out. Just saying...

By the time the first three songs on William's Eclectic Shred are over, you've heard some already fine rock. Some of the BEST instruments I heard out of this field all year. Includes guitar playing equal to that of John Petrucci, or even Mike Oldfield, and keyboard work reminiscent of a young Rick Wakeman. Names that are are just not thrown around. None of that three chords that made a million stuff here. These composers today are the same composers and players they will be worshiping in centuries to come. Speaking of Mr. Wakeman, wait till you hear James Williams keyboard work. To be so excelled at guitar, and then display the same talent for keyboards is mind boggling. Listening to this CD makes you wonder just how the hell he did it. Would love to see him and friends recreate on stage one night. Worthy of Austin City Limits for sure.

Like I said, solid songwriting, each song an adventure in musical excellence. The CD is an exercise in real guitar shedding. Helps if you like that. Not for the faint of heart. Still, some moments so beautiful, any chick would dig listening. The songs, also a fine example of song structure, of course all a display of superior playing skills. This dude's gonna take off. The super players of now have their warning. James Williams is on their path. Don't come upon guys like this everyday. Thank you Plano and the state of Texas. But y'all knew you could not keep this a secret forever, right? Time to share with the masses.

Rating: Using the one to five star system, I'd be out of my mind to say anything lower than 5 stars.

https://www.facebook.com/jameswilliamsguitar
Posted by Jon Kirkman at 23:40