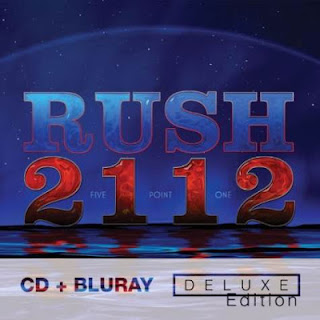 Rush 2112 Deluxe Edition
By the time this album rolled in from Rush in mid-1976 Rush were on the edge of breaking into the big league; odd then that it was with a part concept concept album rather than a straight ahead rock album. The suite of songs which made up the 2112 concept took up the whole of side one on the album and remains hugely popular with the massive Rush fan base to this day and from time to time the band perform the song in its entirety in the live arena.
The concept behind 2112 is a Sci-Fi one about a man who finds a guitar and then learns how to play (Very prog like and remember it was 1976)
Ultimately you either get the story or you don’t although the concept is not necessarily something that would exclude listeners. The concept and the album however at the time did get the British music presses knickers in a collective twist with the NME going as far as to allude to Nazism which if you know anything about the members of Rush you will know is ludicrous.
No matter it was this album where Rush started to step up to the big time and the band’s first live album was recorded during the tour to promote 2112.
As ever with Rush the lyrics come from drummer Neil Peart although both Alex Lifeson and Geddy Lee write a complete song apiece with Lessons and Tears respectively. The other songs on the album bear no relation whatsoever to the main 2112 track although the album as a whole does hold together incredibly well
What you get here with the Deluxe edition are three extra live tracks, Overture, Temples of Syrinx and A Passage To Bangkok. These live tracks also proved beyond a shadow of doubt that Rush could re produce the sophisticated sound heard on the studio version of 2112 The second disc in the set is a 5.1 re master of the original album. Having got the re mastered edition of this album around ten years ago I must say that to my ears the re mastered version does sound that little bit crisper and clearer which is always a good thing particularly when you want to crank up the volume as believe me you surely will on the 2112 track itself. Oh while I am at it the length of 2112 should, not put you off because even though the track is over twenty minutes long never do you think the song has outworn its welcome. Of course if you are a Rush fan you will know this hence the song is incredibly popular when it makes an appearance in the Rush live set.

On the basic Deluxe edition the sound on  the DVD /5.1  set up is incredibly clear and the visuals are a coming book interpretation of the story which makes it very easy nopw to follow the narrative. There are also options to view the lyrics liner notes photos and comic strip . My one gripe is that the record company have changed the artwork for the album which was not really necessary to be honest as the original artwork was in its way iconic but it is a small complaint.
In the super Deluxe edition which really is for the diehards you also get a hardback book which is aimed at those with a little extra cash to spare. If not then the standard Deluxe edition will most certainly hit the spot. For me I suppose the Super Deluxe would be the one to get but if Rush are your bag then I suggest that the deluxe edition will be high on the want list no matter which edition you plump for.
For many this is where the Rush story really began and was the first time the band appeared on the horizon. For those who had been fans of the band prior to this album it was a case of “I told You so” but in reality commercially 2112 was the first album to hit the target……Something they would do with increasing regularity from here on in
Posted by Jon Kirkman at 18:21