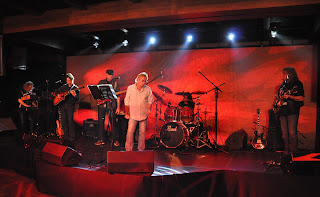 The music industry is buzzing about the new concept album by former legendary Uriah Heep / Lucifer's Friend vocalist John Lawton titled 'The Power of Mind'. An innovative new CD, conceived, written and produced by the CGI member, Dr. Milen Vrabevski, but performed by John Lawton and Bulgarian ensemble Diana Express, 'The Power of Mind' is an exploration into the science of positive thinking and its applications to the subconscious mind. Featuring 14 amazing songs that showcase the soulful vocals of John Lawton and the powerful instrumentals by Diana Express will leave you wanting to hear it again and again...

“ 'The Power of Mind' is a concept album with positive thinking being the theme,” John explains. “In the world of today, I don't think there are many better things to focus on. The way the songs flow into each other is really the way one would read a book or relate stories to friends. The melodies and lyrics say a lot about how we should view each other.” John Lawton began his musical career in North Shields, UK, in the early '60s with The Deans, a bunch of kids who decided at random that John should be singer. He then moved on to West One and later to Stonewall, which included John Miles, Vic Malcolm (later of Geordie) and Paul Thompson (later of Roxy Music). After Stonewall finished a stint at the Top Ten Club in Hamburg in 1969, John decided to stay in Germany. He is offered the job as singer with legendary German cult rock band Lucifer's Friend (1969-1976, 1979-1995) and subsequently recorded 9 studio albums during his time with the band. In the early '70s John also joined the Les Humphries Singers, with whom he recorded more than 20 albums and took part at 1976's Eurovision Song Contest. In 1976 John joined Uriah Heep as their front man, and recorded the classic albums 'Innocent Victim', 'Firefly', 'Fallen Angel' and 'Live '79', and toured Europe and the USA until September 1979.

During his longstanding career John has worked with some big names of rock, on various projects, including Roger Glover's 'Butterfly Ball' and Eddie Hardin's 'Wizard's Convention II'. In late 1980 he joined German rock band Rebel on three albums, including their hit singles “Line of Fire” and “Eagles Flight”. He would record one more album with the group, now known as ZAR in the early '90s. John ventured into the world of classical music when he recorded vocals for Volker Barber's 'Excalibur'. In January 1994 he formed GunHill, later known as JLB – John Lawton Band. The band recorded two albums (studio/live) and toured the UK and Europe. In August 2000 John recorded his first solo album, the critically acclaimed 'Still Paying My Dues To The Blues'.

In December 2008 John entered the world of television by presenting the Bulgarian travel documentary series “John Lawton Presents”. Which leads to the teaming of John and Bulgaria's Diana Express in November 2011 to record 'The Power of Mind' in Plevin, Bulgaria. John comments, “The involvement came via a musician friend of mine from Sofia, Bulgaria, who knows the writer and producer of the album, Milen Vrabevski. I met with Milen briefly in Sofia after an exchange of e-mails and he gave me a copy of the original 'The Power of Mind' CD, which had been sung in Bulgarian. I must say I liked it very much, it was very well sung, played and produced. Milen then asked me if I would consider singing the whole album again in English and after looking through the English lyrics I agreed. It was a real joy to record in the studio in Pleven, owned by the guitarist of the band, Maxim Goranov. It took me about a week and a half to complete the solo and backing vocals.” John Lawton has built a reputation on his powerful vocals and charismatic personality and is regarded as one of the best singers around today! And now with his new CD


'The Power of Mind', John has reached an artistic peak. In conclusion John has this to impart to his longtime listeners, “People who know me and my background will expect something new and with 'The Power of Mind' they have exactly that. The album is a collection of excellent songs very well played and produced and one which I am very proud of...so make sure you give it a good listen. Think positive and trust in the Power of Mind.” 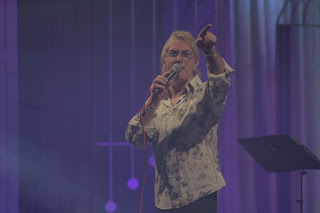 Available soon on iTunes, “Fairy Tale”, the first single from 'The Power of Mind'.

Visit the official John Lawton website at
www.johnlawtonmusic.com/JLmusic.htm
Posted by Jon Kirkman at 15:57