Nektar are appearing as part of the Cruise To The Edge event in March 2013. In 2004 founder member Roye Albrighton spoke to Jon Kirkman about the then current spate of reissues of the bands back catalogue.Here is that interview


Despite the Germanic spelling of their name Nektar were and indeed still are a British band. The band did however live and work in Germany for a long period during the seventies. The band like many from that era broke up at the start of the eighties although their albums continued to sell well to a hard core dedicated audience. The band were persuaded to reform for a gig at the Nearfest a couple of years ago and since then the band has decided to continue with the only change being in the replacement of original bassist Mo Moore. 2004 will see the start of a big re issue campaign of the bands back catalogue and Jon Kirkman spoke to Roye Albrighton about the forthcoming re issues and tour dates just prior to Roye flying out to America for a photo session and rehearsals with the rest of the band.

Jon Kirkman             I believe you are going to America next week to have some photos done.

Roye Albright            Friday yeah, it’s a long way to go to have a few photos. Well, we’re going to kill two birds with one stone really; there’s a photo session next Monday but I’ll be there Friday and Saturday/Sunday we’re just going to be in for a couple of days rehearsals which will be great, advanced rehearsals from London.

RA                              Oh, don’t remind me! Yeah, this year is our thirty-fifth anniversary. I think a lot of it has been kicked off by the Nearfest thing really. It was bandied around for many years that people were hoping that we would get back together for a show and nothing really came of it: this is going back about ten years. We have got a web site that was started up by a close friend of ours in America and that was the unofficial site and he has just been pushing Nektar all the time for the last eight years and he got quite a good following really. I just happened to go on that site and I contacted Mo the bass player and suggested doing a couple of shows and he suggested talking about it and at the same time funnily enough the guy from Nearfest emailed me and asked if we would be interested in getting together just for one show – coincidence that was. So it started off from there really.

JK                               So a series of coincidences brought the band back to prominence? Let’s go back to the early days. I grew up listening to rock music in the seventies and when I first heard Nektar I made the huge mistake of thinking that you were a German band.

JK                               The thing about these albums that are coming out now, they have actually been out on CD before but the quality wasn’t all it could have be. You had done a really good job on renovating them and upgrading the sound and also there’s going to be a lot of extra bonus tracks.

RA                              All I can do is apologise for those CDs that our old record company did. There was no excuse for what they did but I can’t take the credit for the re-masters really although I just had the final ear on it. Credit goes to our manager Mark Powell who has the expertise in re-mastering and he did a fantastic job; he really did.

JK                               The bonus tracks look pretty interesting for instance on Recycled there is the entire album, the original mix by Geoff Emerick who’s famous for producing Paul McCartney and being the recording engineer for the Beatles.

RA                              Yeah, we did the first mix actually at Air Studios and we also did one at the Chateau d’Hierouville where we recorded them. We were in two minds which one to use really and ended up using the latter but half of the first one was Larry Fast only doing some synths. The one that was released we just let him go to town on it and it was just full of carpets of synths and things. The two versions on that new CD, we thought it was good to put them both on because you see the different stages of the album being made really as opposed to completely separate albums. It will be interesting to see the variation. Also, as far as the bonus tracks go, I was listening to the latest re-master this morning, it is really funny to see how one extreme to the other can happen. I mean some of them sound almost demo-ish but if you listen to them now you think, “Well that is the production that is.” We have dug up some really obvious stuff I tell you! It is going to be interesting for those Nektar fans who like to listen to all that stuff.

RA                              Yeah it may be that we start the show off with that; we always have ever since the mid seventies. We started off with it because it is a natural opener for the show. As opposed to Remember the Future where it is really cut and dried, I think A Tab in the Ocean lends itself to flow a little bit more. Side one you can take it as it is, great piece of music and side two being broken up into several parts I would say it is more, not product for your money but like with Remember the Future in the old vinyl days it was a complete side, turn it over, complete side. At least with Tab in the Ocean you have got the options of either having twenty minutes of Wow there he is or turn it over and have several tracks. That may be why the album itself was popular.

RA                              I met Steve Harris at Frankfurt airport years ago. He did say to me that they were thinking of doing one of our songs and I said, “Yeah, ok Steve!” I couldn’t imagine Iron Maiden doing a Nektar song you know and he said, “No, no, we fancy doing King of Twilight”, and after we said our goodbyes and he walked away I was thinking that yeah, I could imagine him doing that but in a very heavy sort of way.

RA                              It has been a combination of things really, first of all his commitments and also his health is not what it used to be and touring for several years would be a bit much for him I think. He would be the first one to put his hand up and say that. Anyway we sat down and decided what we should do and came up with the idea of looking for another bass player.

RA                              Well most of the re-issues including the ones at the end of last year will be out by the end of March which will coincide with our European tour which starts in April and goes through almost to the end of April. Then the last bunch of re-issues will be done in that intermediate time and we’ll be in the studio in the last two weeks of June to make a new album here in the UK actually at Chapel Studios in Lincolnshire. It is then all steam ahead for the US tour, which will be starting in September. That will be two bands touring together Nektar and Caravan. 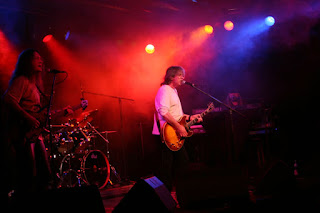