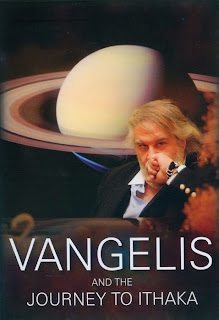 Spotlight:
Vangelis And The Journey To Ithaka
(Gonzo Multimedia)

So I viewed the DVD Vangelis And The Journey To Ithaka the night it arrived in the mail. And then AGAIN the next day. That tells you something right there. If you know me, then one is aware that usually I have stacks of CDs and DVDs to check out (I'm not complaining...I write about several topics including pop culture) at any given time. For a DVD to come in the door and be made that night's entertainment, there HAS to be something to it. The bio pictures subject matter, Vangelis, is just that. A gentleman of incredible talent. One of the best keyboardists I had the pleasure of finding out about, and over time gotten to know his work. Not just a keyboardist. A composer. A multi-instrumentalist; drummer and percussionist. For those lucky enough to see him perform live, a showman like no other. One should be able to look up the word Vangelis and somewhere in the many definitions given, be told point blank just how cool this man is. And not because this author said so, which should be good enough, but because the man is talented in every essence of the word. This DVD, Vangelis And The Journey To Ithaka, explains very well as to why Vangelis epitomizes talent.

Vangelis: “Music is the strongest thing. Strong as oxygen and speaks directly to your soul.”

In all the time I've been a Vangelis fan, I have yet to see a documentary on the man. LONG overdue. Frankly, I've hardly ever seen anything on Vangelis regarding video clips. For me, my Vangelis collection isn't visual but audio with his music being found within my music CD or cassette collection. I believe my first recording of his to be Heaven And Hell (1975). What sparked my interest in him was a guest appearance on that album by Yes' Jon Anderson. Yes being one of my favorite bands for decades now. Oh...and Jon makes an appearance on this Vangelis documentary as well. Shares a lovely story about himself and Vangelis and The Top Of The Pops performance. Anderson always could spin a well-told story. Back to the documentary, frankly it's really the most I've ever seen of the man on film. It's also the most I've ever heard him speak. I find it all very delightful.

In the documentary, Henry Mancini was surprised that Vangelis is “not a schooled musician.” That is a bit SHOCKING. The answer is clearly that Vangelis is a musical genius. Get this – on the documentary (Vangelis And The Journey To Ithaka) to see him actually composing appears like it's no effort for him at all. All very natural. Now others are surprised as well when learning that Vangelis paints as well as he makes music. The results equally astonishing. His paintings, he calls his children and very seldom lets them out of his sight (the occasional art showing...and he's hesitant...the public insisting to be allowed to see, and study, and enjoy).


Guest appearances from Vangelis' musical achievements in film score appear in the documentary. People like directors Oliver Stone, and a man who should bring nightmares still to 13 year old girls all over the globe, Roman Polanski. Sorry for the editorial moment. Many more very talented people appear throughout this very well filmed and put together documentary (Isolde Films). They recall memories and share their own personal insight into who this really great man is.

Rating: One a scale of one to five stars, with one meaning it blows chunks to five meaning just extraordinary, then FIVE STARS it is. Again...I watched this twice. The second time as intently as the first. My actions cut this review to the chase; a MUST HAVE documentary if a Vangelis fan or someone who just wishes to find out about a really cool guy who just happens to have been bathed in talent. The results are what is most interesting.