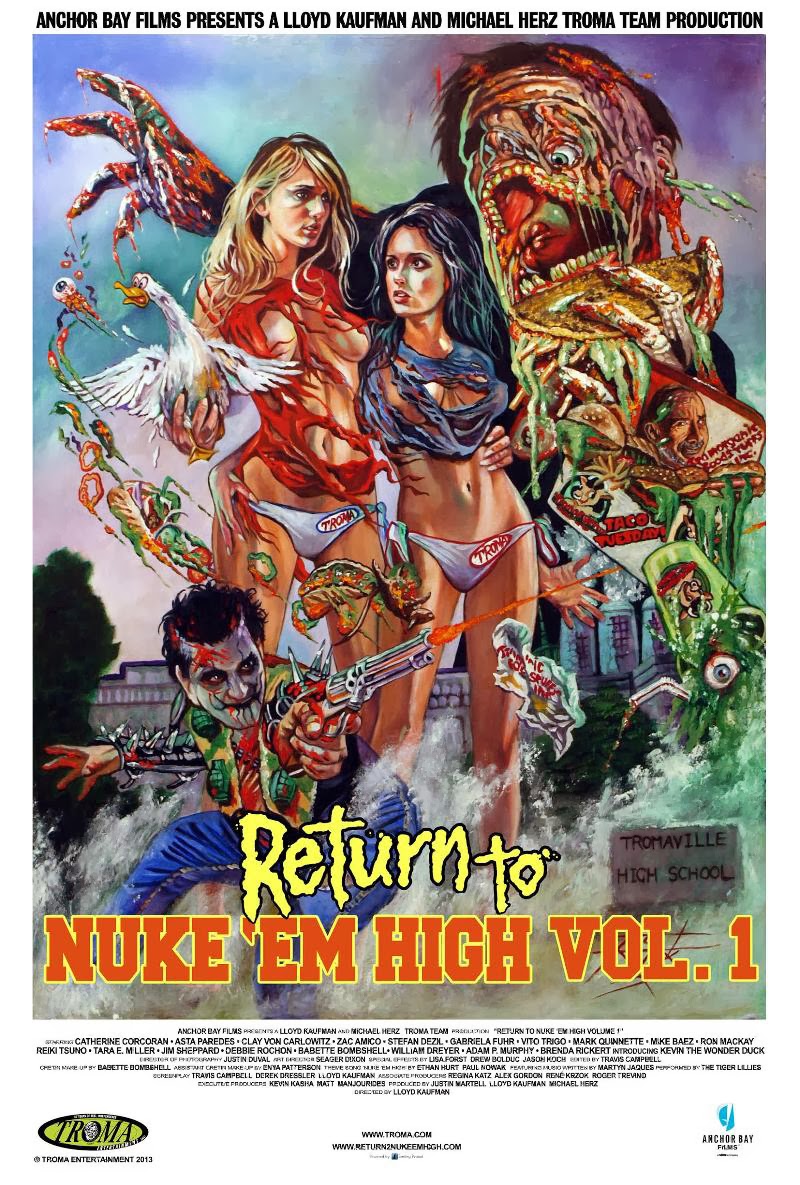 This past Thursday night (20 Feb 14), I had the pleasure of attending the Houston film premier of (Anchor Bay Films Presents) 'Return To Nuke 'Em High Volume One'. To make the occasion even more special, it was part of a DOUBLE FEATURE. I can't remember the last time I attended one of these at a theater. Playing before Troma Entertainment's newest offering, a blast from their spectacular past; Class Of Nuke 'Em High (1986). Both films having in common the same genius director, Mr. Lloyd Kaufman. Along with equally brilliant Michael Hertz, FORTY years now making and distributing films that if not for Troma Entertainment, might have never seen the light of day onto the Big Screen, Bata-Max, Laser Disc, VHS tape, DVD, Blu-ray (and whatever other format I might have missed).

Troma Entertainment, a unique independent film B film company specializing in OVER-THE-TOP horror, sci-fi, and comedy movies. Other stuff as well, included instructional books and documentaries on how to MAKE YOUR OWN DAMN MOVIE. So much for any worry concerning competition. It's almost a dare to the general public, if you don't LIKE what you see, to do better. The results are most rewarding of it's audience, people LIKE me. Troma Entertainment in it's now four decades of being around has inspired, and it's films contained some rather LARGE Hollywood names. Some consider it a stepping stone to certain fame to participate in a Troma movie. A privilege even. I'd be in that school of thought myself. An old saying; “Everyone's got to start someplace.” Welcome to the world of low-budget movies. The B movies of yesteryear brought us some of our motion pictures brightest stars, and those that work behind it's scenes. It's a tradition that still goes on today thanks in part to Troma Entertainment.

So I drove at least forty miles, through parts of the forth largest city (Houston aka Space City) in America, finally ending up at a very cool movie house called, The Alamo Draft House. For clarity, the one I went to was in Tomball Texas. A cool place to see a cool film like 'Return To Nuke 'Em High Volume One'. One of those fancy theaters in which you can enjoy a wonderful menu of fine booze and food. Throughout the evening I had a couple Samuel Adams brews, and a tin of french fries that were to kill for. Good service too. Reasonably priced. Most important, they remained in control of the situation with rules about no talking, texting on cell phones, etc. I think it all helped the experience that was a fun and unique event to be able to participate in. That's why I drove across Houston. Please note...and very well worth it. An evening to remember fer sure.

What's so special you ask? Why do ALL this and not just wait for the Blu-ray to come delivered to my snail mailbox was simple; LLOYD KAUFMAN himself was going to be there as well !! Holy Shit my rodent flying rabies infected flying creature. I been seeing Lloyd and Michael Hertz on my television screens (different ones over the decades) since...and I tried to remember when talking to Mr. Kaufman's better half (no...not Toxie...that comes later). Massive brain farts...here it comes...I remember seeing The Toxic Avenger (1984), my FIRST Troma film, on either cable TV, or on VHS tape. Had to be in the 1980's. Am surprised I can remember that, especially considering how due to a collapsed marriage and lots of drinking and drugging, that I can barely remember little else about that decade.

I have a confession. I absolutely LOVE Troma in-house films that has Mr. Hertz's or Mr. Kaufman's personal hands on. One of their best, Troma War, came out back in 1988. The humor, the over the top grossness – all the things a Troma fan wants in a Troma film..oh yeah...and tits. Don't have any hang ups on the human body and be watching movies like this. Well...that's all part of the charm. I learned early on what the name Troma really stood for; Tits Are Our Main Attraction. Besides Toxie, a pair of healthy looking female breasts, a symbol of Troma Entertainment and it's fine low-brow contributions to American culture over it's now forth decade history.

And have I mentioned yet that there is DEATH in Troma movies. LOTS of crazy-ass scenes where people die in ways, a normally sane viewer could never fathom. And if you watch enough Troma movies, there's this car scene where it leaves the ground and gets completely destroyed. To save money on repeated filming of car crashes that might appear in future Troma films, they uses the same footage, in every new film where a scene like that is called for. I consider it an INSIDE JOKE. To see it inserted now into the Return Of Nuke 'Em High Volume One...shit...did I say spoiler alert? Here's a little more. The audience including myself, applauded and cheered when seeing it again. If a Troma fan already, it's to be expected. New Troma fans should adapt pretty rabidly.

After the showing of Class of Nuke 'Em High and before the PREMIER showing of Return To Nuke 'Em High Volume One, in classic Lloyd Kaufman style, he is seen walking up the aisle to the stage wearing a paper bag over his head. The joke...something about an over-priced actor who shall remain NAMELESS. Gets a huge laugh from the audience. From there a wonderful Q & A session where Lloyd gave his all answering fans questions. Could have been the same ones he's always asked, but being a people person, it's obvious that what matters most at that very moment in Lloyd's life, is the individual he is talking to. Is keen to throw in a personal antidote about whatever subject matter. Show that trademark smile for any photo opportunity. All this while keeping alert to the audience as well. From the last row up, Lloyd appeared to come off on stage as good-natured, comedic, fascinating, and a real pleasure to be around human being. Always a treat coming across people like that.

Uncle G Reviews Return To Nuke 'Em High Volume One (2014 Troma Entertainment)
Loved It !! Of course I did. My first thought after immediately viewing Return To Nuke 'Em High Volume One was if I using the one to five star rating system, I'd say 4.5 stars. Reason because it's “Volume One”. And my reason for knocking off a WHOLE half star...in the middle of observing a major female characters hygiene habits...WAIT....did I say spoiler...shit. Fine...something happens, or maybe not? When you view Return 2 Nuke 'Em High Volume 1 yourself, then you'll realize what it is I am referring to. More then likely you won't agree with my subtracting a half star from what I'm sure you will think for yourself, to be a 5 star flick. Honestly (like I'm lying my ass off the entire rest of the time) I could agree with that. Maybe it was the toxic taco I found on my way out of Alamo Draft House (in Tomball Texas) on the ground, glowing and begging to be consumed by a live creature? Well who am I to rain on someone's parade, and besides I was slightly still hungry. Did Troma Entertainment arrive in a vehicle that it may have fallen out of? It's been a while since I ate anything coming out of New Jersey I told myself. Since when I moved in 1986, or the last time I was with my first wife in '92.

While it could be said that 'Return To Nuke 'Em High Volume One' must have been made for fans of Troma Entertainment, it's also a great launching vehicle for the first timer exposed to a Troma movie. Anyone who is open-minded to others ideas, is mature enough not to get offended by everything they see, and enjoys a good time. One job of a film is to take the viewer away mentally from the everyday ups and downs of life. A job succeeded in EVERY Troma Entertainment movie I have ever watched.

Return To Nuke 'Em High Volume One is NOT really a straight up remake of the Class Of Nuke 'Em High. More like an update on what happened since Class Of Nuke 'Em High was made. These new undated participants given yet another set of unique circumstances to over come. This adaption to the already kick ass franchise gives EVERYTHING one wants to regard a modern day B comedy / horror / musical flick.
The main love story as found in the original Class Of Nuke 'Em High, a traditional boy-girl relationship takes on a whole new twist in Anchor Bay Films Presents 'Return To Nuke 'Em High Volume One'. Meet Chrissy (Asta Paredes) & Lauren (Catherine Corcoran). Main characters. Two attractive young female adults who very much, have the HOTS for each other. The two actresses do a wonderful job throughout the fun flick. Catherine Corcoran's role a tad harder for she had to work with an animal. To the late and great W C Fields, a horrible situation for any actor, made only worse if a child was in the scene also. In this movie, one of the stars is a duck. Ladies & Gentlemen may I introduce; Kevin The Wonder Duck. An emotional attachment from the viewer is formed almost immediately the time our new feathered friend appears on the BIG screen. The duck...almost steals the show. But wait, have I mentioned the word CRETIN yet? Like every other actor participating in the film, the ones that make up the most fucked up high school Gee Club ever seen, give their ALL in front of Mr. Kaufman's camera. A director...a man of many hats in the motion picture business, that knows what his audience...the Troma audience...wants to see.

To sum up, I went to the screening to have a good time, and I did JUST THAT. Was a hoot watching two cool films, and in the company of one of the most colorful film makers in today's cinema; Mr. Lloyd Kaufman & his lovely travel companion (again not meaning Toxie).
Anchor Bay Films Presents 'Return To Nuke 'Em High Volume One, exceeded my expectations, or possibly met them head on. I been a casual fan of Troma Entertainment for a few decades now. I know when a Troma film starts that I'm guaranteed to have a good time viewing it...no matter what. I'll either LOVE it to death, or entertain myself by picking it a part. Either way I'm distracted from what credit card payment I'm making next. A cool reward for watching and letting ones mind,  having a fun time getting into whatever unbelievable stuff you see before your eyes. One of my favorite motto's; "Life can't always suck." Bright spots need to exist. Those like Troma Enertainment. A common message to be aware of the problems, but maybe not to take them seriously ALL the time. By making fun, one's making at least aware. 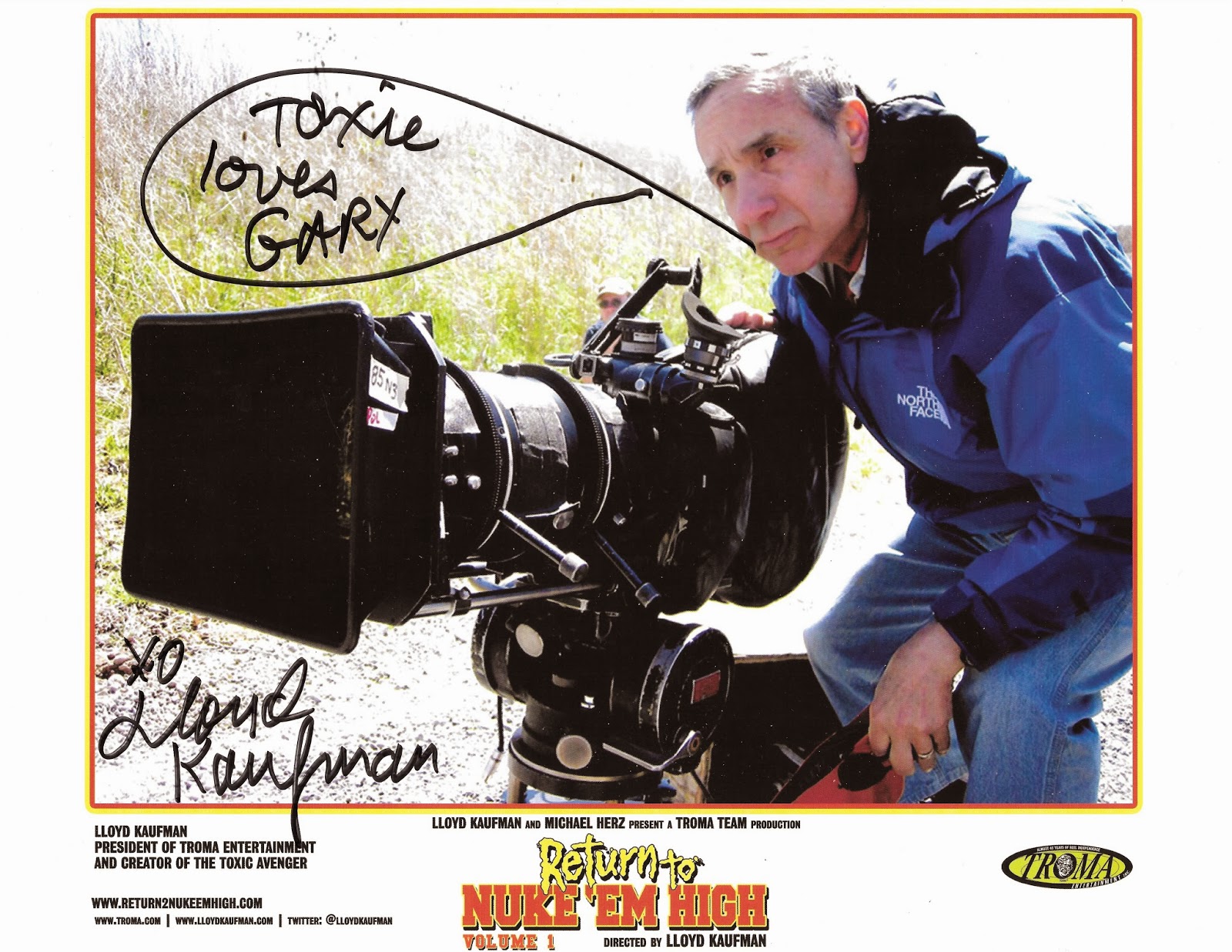