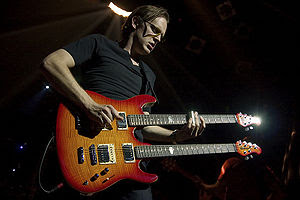 Sloe Gin is the seventh album from Blues rock guitarist Joe Bonamassa. Over the last seven years Joe has built up an enviable reputation as a live performer and his albums have also sold in increasingly higher numbers. Sloe Gin is produced by Kevin Shirley who has in the past worked with the likes of Aerosmith, The Black Crowes and Led Zeppelin. While the album breaks new ground for Joe it still retains that Joe Bonnamassa feel we have grown to know and love over the previous albums and seven years worth of live work. Joe spoke to Jon Kirkman whilst in the middle of an American tour in Florida. Joe talked about the new album and also his love for Progressive rock and his plans for his English tour early in 2008.

Jon Kirkman Your new album Sloe Gin has just been released and gone straight into the album charts. This must please you a great deal.

Joe Bonamassa Oh yeah, I am tremendously shocked, we debuted on the American album charts; I mean it was like the biggest debut we had ever had so I am not used to all this attention for an album (laughs). But really I am just glad that people enjoy it you know.

JK What was it like working with Kevin Shirley? He does after all have a great track record having worked with people like Led Zeppelin, Black Crowes, Aerosmith and Joe Satriani.

JB Oh yeah, Kevin is great, he takes the music further than I would even if I had had a million years to work on it. His outlook on things comes from such a very worldly place that he is able to take the music and do something really cool with it without making it sound as though it is over produced. It is like a fine line but he knows exactly how to push the boundaries without going over the edge.

JK Having heard most of your previous albums I think Sloe Gin has the edge, would you put that down to the production because at the end of the day it is still a Joe Bonamassa record. Kevin Shirley hasn’t changed your sound particularly.

JB No, you’re right; it just has a different quality to it. It is a bit edgier and is a riskier album. I think the albums we did before were a little safer. The fact that we have songs on this album that don’t necessarily have a guitar solo is in my little world a big risk. So I am really happy that people enjoy the album so much. There are some people of course who say, “Oh you don’t play as much guitar any more, you are getting old and slowing up” (laughs) I mean, do I have to be the two verse and twenty minute guitar solos kind of guy – is this my fate? (Laughs).

JK Well let’s face it there is always going to be elements of any fan base who will find cause to complain. This is your seventh album and perhaps for people who were around when your first album came out, come of these fans may resent your getting successful because you are not their little secret any more.

JB Well yeah that is the kind of thing I am talking about: I have always been this kind of underground cult hero to some people. The strange thing is they help you out and they join your street team and help promote you and they go beyond the call of duty. They are just amazing fans, but them some of these fans prefer to see me in a club rather than a 2000-seat theatre.

JK I don’t see the problem with what you are doing and how your career has built because surely the aim is to have as many people as possible into what you do? Perhaps at some point you could still do the clubs, let’s face it the Rolling Stones are a good example of this. The biggest band in the world playing stadiums and every now and again they will play a few club dates.

JB Yeah, they like to break it up. They actually played a place in New Haven we like to play not so long ago which is a 500-seat club. We do that as well, mostly on this tour it has been theatres but we have a couple of gigs coming up in a 240-seat room and it is cool.

JK How much of this album has made it into the live set?

JB About five songs, which is a lot because we only do about 13 or 14 songs in a live set?

JK There is a question I have to ask you about your live set. That is, why do you play music from Yes in your set? I can understand some of the other covers say from Jethro Tull but Yes seem a world away from that kind of thing.

JB Well, for me it is kind of well; I do the Yes stuff because I am a big fan of progressive rock; I mean we actually do Genesis stuff now. We have kind of retired the Yes stuff. We have been doing Los Endos in the live set. But really I am just a huge prog rock fan so I try to find little snippets if prog that I can throw in that kind of make sense. I know some of it is a little bit out there (Laughs) but it is a bit like I know there are fans out there like my dad who are blues fans but still went out to see bands like Yes and Genesis and went to see the Allman Brothers and Deep Purple and bands like that, really just music fans. I think they all get it eventually.

JK So when you and the band come to the UK in early 2008 we can perhaps expect Los Endos then?

JB (laughs) Yes but we might be doing Selling England By The Pound as well (Laughs).

JK Well I will look forward to that but the thing about your covers is that you don’t always do them as straight covers you always turn them inside out and make them your own, which makes for a better tribute I think.

JK You are currently on the road in America and are due to hit the UK in early 2008. What are the plans for the live show? Will we get in the UK pretty much the same as the American fans are getting or will you mix it up a bit?

JB We have got some shows to play in America them we have six and half weeks off which is a long break for us. In those six and a half weeks we are going to try to put together a new show. Then we kick off again in 2008 in England. So the English audiences will be the first to hear the new show. Hopefully it will be good.

JK Well the album is doing great both sides of the Atlantic. After seven years you really seem on your way and it is great to see the way your career has developed.

JB The last three or four years have been very busy for me.

JK We look forward to catching you in 2008 in the UK. It is great that the album is doing well. I am sure there are a whole lot more Joe Bonamassa fans that will be coming to the gigs in the New Year.

JB Thanks Jon. See you and the rest of the English fans in early 2008.


Joe went on to bigger and better things with the album Sloe Gin and also further albums including The Ballad of John Henry, Black Rock and Dust Bowl. He has also formed a band, Black Country Communion which features Joe alongside Glenn Hughes, Jason Bonham and Derek Sherinian. The band have released two albums to date Black Country and 2