Thin Lizzy The Boys Are back On Tour. UK Dates for 2012 and Reissues! 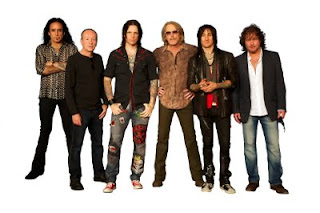 Thin Lizzy The Boys Are Back On Tour…

RICKY WARWICK – LEAD VOCALS / GUITAR
Thin Lizzy is one of rock music’s most recognizable names. The fiery Dublin band exploded onto the scene with a fresh sound, look and attitude. Lead by the incomparable Phil Lynott, the band reached many peaks and influenced generations of musicians with classic tracks such as “Jailbreak”, “The Boys Are Back In Town”, “Still In Love With You”, “Cold Sweat”, “Emerald” and “Don’t Believe A Word”. Most rock historians would agree the pinnacle of their commercial success was in 1983, followed by the bands’ premature demise, as they played their last gig in September of 1984. Just two years later, the world was shocked when singer/bassist and founding member Phil Lynott passed away at the age of thirty six.

Twenty five years have passed, the world has changed, but the amazing body of work that is Thin Lizzy still retains all of its vibrancy and influence. A new lineup has formed to take Lizzy’s music to a whole new generation of music fans. Led by alumni Scott Gorham, Brian Downey and Darren Wharton (all of whom played in Thin Lizzy with Phil Lynott) the stellar lineup is completed by Guns N Roses Richard Fortus (guitar), Bassist Marco Mendoza (Whitesnake, Ted Nugent) and The Almighty’s Ricky Warwick on vocals and guitar. The band have already wow-ed fans and critics alike on a sold out UK tour in jan/Feb 2011 and a show stealing performance at Download festival 2011.
Alongside the new lineup, Universal Music has committed to a series of re-issue, deluxe and special releases of classic Thin Lizzy material. Deluxe expanded editions of the seminal albums “Bad Reputation”, “Black Rose” and “Chinatown” are released in July 2011. October 2012 will see the release of a lavish collection of BBC material –“At The BBC” – that will be available in three formats – a 7CD, 1 DVD boxset, a 2CD anthology and a 5 LP vinyl set.

Thin Lizzy have confirmed a 2012 UK tour. Full dates are as follows

VIP packages will be available through the bands website -

www.thinlizzyband.com
Posted by Jon Kirkman at 14:10