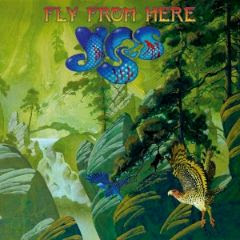 Well if ever there was going to be an album that divided an audience then this album would be a prime candidate. Why I hear you ask? Well to some people Yes without Jon Anderson is unthinkable but let’s be honest here in all of the bands career Yes have been all about pushing the frontiers of music and in order to do that there has been a big turnover in membership.

The current line up now includes the three long time members of Chris Squire, Steve Howe and Alan White and new vocalist Benoit David and former member Geoff Downes on keyboards. The album has also been produced by another former member Trevor Horn who sings on the extended suite of Songs We Can Fly From Here and I suspect a fair bit more of the album judging by what I can hear. So what you have is the Drama line up plus Benoit. Not a bad line up to my thinking.You might also recall that the Drama album was the first not to feature Jon Anderson so a precedent with regards an album featuring another vocalist has already been set.

Fly From here is the first yes album since Magnification in 2001 and as such the fan base has been almost chomping at the bit.

So what do we have here? Well first off in my opinion this is the album Yes had to make and I think they have pulled it off in spades. Fly From Here is a pretty good Yes album and as you will all now it features the Drama line up on a large portion of it. The big draw here is the opening track We Can Fly From here which is divided up into various parts or suites if you like six to be precise. This was the track that Trevor Horn and Geoff Downes originally presented to Yes in late 1979 when the Drama line up first came together although I think that this particular version has been fleshed out somewhat and extended rather then the shorter demo version that is readily available on thye bootleg circuit. Here it is lengthened to provide an epic track very much in the style of Yes and if some of the fan base can have an open mind there is much to enjoy with this extended suite of songs. My favourite part is the fourth piece Madman At The Screens but there really is a cohesive feel to the whole of the song and Trevor does sing well throughout aided and abetted by Benoit David and Chris Squire

Another highlight for me and possibly the highlight of the album is the final track Into The Storm which is a fantastic track and whilst breaking new ground in terms of sound it does retain that “Yes” sound and feel. For ong time fans and perhaps those who aren't sure the track Hour of Need definitely has that “Classic Yes” feel with Benoit sounding incredibly like Jon Anderson and if there were such things as singles these days then this track could be the ideal choice.

Of course any new album after such a long break from the studio is bound to arouse much interest and Fly From Here is no exception. What I would suggest to those who perhaps are wary is play this album a few times and let it sink in. I remember that Drama had a similar effect on the Yes Fan base all those years ago and now the album is quite rightly regarded as a classic the same went for 90125.

The reason Yes has managed to continue for so long is because they have never been afraid to embrace change. After all one of the bands early songs was called Perpetual Change. So let Yes move on and who knows maybe Fly From here can attract some new fans which really can’t be a bad thing. Fly From here may well divide the fan base but it is an excellent album nevertheless!

Fly From here in my opinion is far more likely to please than upset and over forty two years on into their career Yes can be confident that once again they have delivered the right album at the right time.
Posted by Jon Kirkman at 14:37