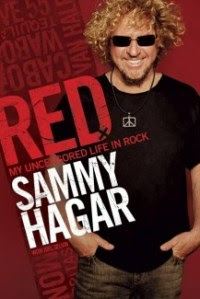 Red: My Uncensored Life In Rock
Sammy Hagar with Joel Selvin
It Books

Ask anyone with even just a passing interest in rock music and they will have heard of Sammy Hagar. The man’s CV includes time with two major groundbreaking rock bands with Montrose and Van Halen. He also has a massively successful solo career and has made a great many guest appearances over the years.

This book is exactly as it says on the cover his uncensored life in rock and unlike many books that profess to be uncensored this one really is. Sammy has an amazing candour and honesty about his life even the bad parts and he never pulls his punches. He is honest but he is also fair.
I honestly couldn’t put this book down it really is a great read and of course you are driven back to the albums that Sammy has contributed to over the last thirty seven years.

One thing you couldn’t fault Sammy for is his work ethic and you kind of get the impression that even had he not been a rock star and A GREAT ONE AT THAT Sammy certainly would have been a success whatever road he chose to drive down.
Many people will of course be attracted to the chapters that address the years when Sammy was a member of Van Halen and if I am honest I am sad that the guys in Van Halen can no longer work with Sammy but I also get the feeling that the problems come more from the Van Halen camp than Sammy. No matter sad as that is Sammy didn’t let it bring him down and he went onto another great band ,Chickenfoot a band of equals who don’t play mind games just great music.

For those who love Sammy Hagar this book will be a must have but even if you are not the world’s greatest Sammy Hagar fan (and if not why not) there is much in this book that will interest you because it is the story of a guy who dreamt of being a musician and was lucky with the breaks and eventually made it happen and if that ain’t a story worth reading then I really don’t know what is.

Many years ago TV companies used to make films out of books like this and I am sure if there is an enterprising director out there then maybe it will get made but one thing is for sure reading this book you just can’t help liking Sammy Hagar; The Red Rocker!