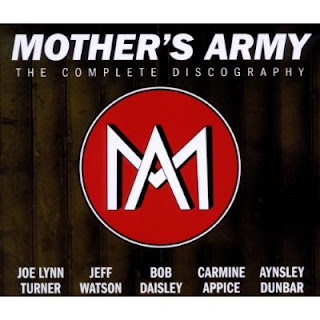 Mothers Army:
The Complete Discography
ear MUSIC
One look at just who makes up the numbers to Mothers Army is enough to catch your interest. The problem is for many is this actually a really good collection of artists who have made some great music or is it just a collection of musicians having a laugh and jamming on a couple of riffs they knocked together while together in the studio for five minutes.

Well from my point of view this set of albums comes under the former. Whilst the artwork is a little low key the contents are actually rather good and certainly worthy of your interest after all when you have Joe Lynn Turner,Jeff Watson, Bob Daisley and Aynsley Dunbar all linked together on this project it should at least be interesting enough with the talent on display and Carmine Appice, Jeff Watson, Joe Lynn Turner and Bob Daisley have all written enough big songs in their time that everyone will know.

For many the expectations may be greater than the actual product delivered but come on give the albums a try. What you get here is all three albums that this band recorded between 1993 and 1998 the pull is that you get them in this box for the price of a single album so in terms of value for money that is a definite [plus.
The contents are Mother’s Army (1993), Planet Earth (1997) and Fire On The Moon (1998). For me at least it is the latter two albums that will appeal more being as they are a little more refined than the first album although bear in mind that the second album is a little bit more “Floydian” in its approach; obviously the musicians concerned thought they had something and decided to take it to the limit and on the second two albums there are a number of really GOOD SONGS :Way of the World, Fire On The Moon and The Code. Problem is, good as they are they are not quite good enough.

That isn’t to say they are bad they are certainly good enough and perhaps if these albums had originally come out in the mid eighties when the market for this kind of music was absolutely massive then perhaps the band would have had a bigger profile than that of the musicians that made up the band.

The albums were of course rather popular in Japan but the melodic rock community will definitely like this release bearing in mind that the cost of these three albums on import would have been very high. So for lovers of well executed melodic rock this album will be a welcome release
Posted by Jon Kirkman at 15:29