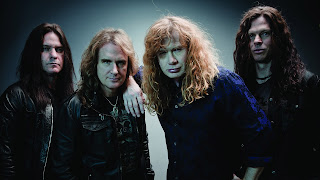 Metal heavyweights Megadeth have today announced that they will be touring the U.K. in June of this year. They will play headline shows in Newcastle, Glasgow, Manchester and London. Megadeth tickets go on sale at 9 a.m. on Friday, February 15, and are available from
www.livenation.co.uk
or
www.ticketmaster.co.uk.

Megadeth’s Super Collider is the first release through Mustaine’s new label, Tradecraft, through UMe.
“It was a real thrill for us to learn there was an opportunity to join Universal,”said Mustaine during a break in the sessions. “It seems like every time you see a great band or music video, it comes from a Universal label. Being with Universal is by far the most exciting and prestigious home for Megadeth ever! We are electrified with what the future holds and the possibilities such a powerhouse like Universal will bring for us all. We have worked with some great people over the years, and it is amazing to see so many of them on the Universal team for our new record, Super Collider. If Megadeth being here isn’t satiating enough, having Tradecraft as my own label is going to be really amazing for metal bands around the world.”

With a newfound energy with the band, Mustaine is raring to go, preparing for his latest tour, marking the 20th anniversary of their best-selling Countdown to Extinction album. Mustaine added, “Shawn, Chris and David have all been feverishly contributing some great music and I believe we are doing our best work ever together in the studio right now!”

“Megadeth is not just one of the most successful metal bands, but one of the most influential rock bands of the past 30 years,” said UMe President/CEO Bruce Resnikoff in making the announcement. “They continue to be a huge draw on the road with their longtime fans as well as continually adding new fans. I look forward to working together with them.”

Mustaine formed Megadeth in Los Angeles in 1983, and with a string of five consecutive platinum and multi-platinum albums Megadeth became one of the biggest bands of the mid-’80s and ’90s, boasting such arena anthems as “Symphony of Destruction”, “Peace Sells, But Who’s Buying”, “Holy Wars”, and “Sweating Bullets”, along with the top singles in 1997/98 off Cryptic Writings, “Trust”, (No. 1 track) “Almost Honest”, “Use The Man” and “A Secret Place”.