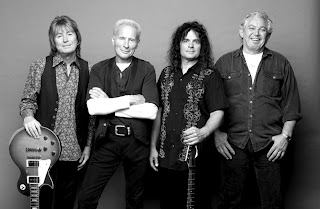 British rock band UFO have confirmed the release of a new single, ‘Wonderland’, taken from 2012’s much acclaimed ‘Seven Deadly’ studio album, which crashed straight in to the top slot of the UK rock chart, the national album chart at 63 and at 9 in the UK Indie chart on release in February 2012. ‘Seven Deadly’, which was one of only five long-players nominated for ‘Album Of The Year’ in Classic Rock’s Roll Of Honour Awards last November, won numerous rave reviews in the UK rock press.

‘Wonderland’ will be released as a three track single bundle, containing ‘Wonderland’, plus ‘Shoot Shoot (Live)’ and ‘’When Daylight Goes To Town (Live)’, both taken from 2005’s double ‘Showtime’ live CD. Next week the UFO live juggernaut will set off on the road to play the following UK tour dates:-