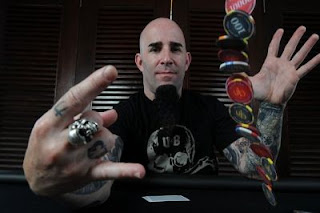 Scott Ian will be heading out for a full UK ‘Speaking Words’ tour next May/June 2013. The tour comes in light of his highly successful spoken word evening at The Garage, London in November 2012.

“My first 'Speaking Words' tour and I get to do it in the UK and Ireland? Really? Wow, how fucking cool is that!!! My one-off show in London went so well and now I get to speak words at you all over the place. Thank you for having a superior sense of humour.

I'm calling it 'Speaking Words' because the pretension of saying I am doing a 'Spoken Word' tour is too much to bear. This ain't no poetry reading. This isn't an evening of sensitive discourse.
It's an evening of ridiculous truth. It's me talking (swearing) about this insane life I've led over the last 31 years, the people I've met and the shit that's happened. And when I'm done swearing, you can ask me anything you want, the floor is yours. Cheers my friends, see you in May and June.” Scott Ian

In a career spanning three decades, Scott Ian, as the co-founding member of Anthrax, helped to create the “New Wave of American Heavy Metal” or as it’s more commonly known, “Thrash Metal” in the mid-80’s. Scott is widely known as the face of Anthrax, and for being a constant and extremely recognizable figure in the worlds of music, poker, comics, movies and television.
In a rare outing Scott will do a spoken word performance. The show is very entertaining and funny, filled with stories from his 30+ years of travelling around the world. The night concludes with a Q & A where the audience gets to ask Scott what they want to know.

Scott Ian’s ‘Speaking Words’ tour will be sponsored by Metal Hammer magazine.
"Geek, author, guitarist, icon: when it comes to recounting the history of metal, Scott Ian's the man - catch him while you can" Alex
Milas – Editor Metal Hammer

You can see a teaser for the tour by clicking on the link below: