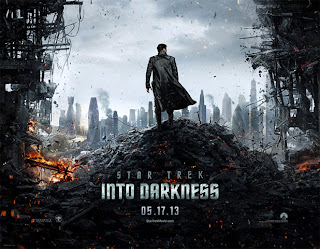 Star Trek Into Darkness makes the twelve Star Trek film since the first one came out in the year 1979. A franchise that since the original television show, also spawned four spin-off programs; Next Generation, Deep Space Nine, Voyager, and the short lived Enterprise.

Star Trek Into Darkness is the second Star Trek film that was directed by JJ Abrams. I must admit that I went kicking and screaming to his last one. Two reasons:

02.) My devotion to the original actors.

To recast such iconic roles, was a heavy undertaking. Both casting and it's film was a MAJOR success. I personally liked it enough to where I was comfortable with the final product. There will always be a place in my heart for the original series and those involved. JJ Abrams opened new doors, and presented new possibilities. A brilliant re-imaging / execution. So much so that I looked forward to seeing it's sequel, in which I did yesterday. The first showing on the first day it hit theaters.

The new film and it's storyline, pick up where the last one left off. Still, it's not really necessary to have ever seen a Star Trek anything to enjoy this motion picture. And speaking of enjoy, I would recommend paying the extra few bucks and seeing it in 3D. The visuals and effects totally kick ass. I asked myself before seeing the movie, how cool it would be to see Star Trek in 3D. I never did before. Am so glad I did. For this isn't the hooky 3D effects where the only items you see in three dimension, are when sticks and such are extended to the audience. That's your Daddy's 3D when he was a youngin'. With Star Trek Into Darkness, the whole picture screen is transformed into a window for us the audience to peer into. The best 3D I ever seen in a motion picture. Has a natural look, and feel to it. Almost like you're a fly on the wall. Effects provided by Industrial Light & Magic. For those aware of their work...there you have it.

Sitting here typing this out, I can't for the life of me think of one thing is which I had an issue with so to throw some criticism around. Not one item. My conclusion is all involved in the making did a superior job. From the writers, to the carpenters making the sets, to the actors, to the films director, JJ Abrams. A shame when the Oscars come around that films like this is largely ignored in favor of artsy fartsy Sean Penn like films. Unlike the ones who vote for the prestigious honor (yawn), I cast my pick by buying the tickets to movies that entertain me. Like this one as a matter of fact. And in all seriousness, I predict repeated views by fans who enjoyed the viewing experience as much a pleasure such as I did. I'm even thinking of going back to the theater, and observing it again. Of course in 3D. Just to see if I missed anything, or even just experience the beauty of the film again. This by the way is a super rarity for me to even contemplate, let along do.

Story: I don't want to out and out spoil those who are thinking about going to see this themselves. I will pass on that along with the cast from the re-launching of the franchise, that there are very good performances from those actors assisting; Peter Weller (Robo Cop), Benedict Cumberbatch, and actress Alice Eve.

Rating: Using the movie rating system of one to ten stars, Uncle G gives Star Trek Into Darkness; 10 stars !!! Bravo !!! Better than I ever hoped for.