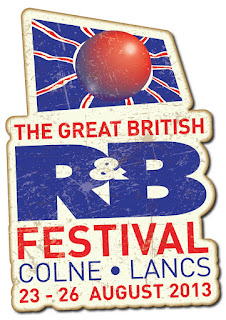 With more than 600 artistes performing at nine official venues over four days, Colne’s annual Great British Rhythm and Blues Festival is now as the key UK rhythm & blues festival on the UK calendar , held over the Bank Holiday weekend.
Following last year’s resounding success, there will be another afternoon of Jazz on the Sunday.

And thats all apart from the 7 official roadhouses.!
The Jessica Foxley Stage returns again, giving young, local musicians a rare opportunity to perform in front of the hundreds of fans on the British Stage through the four day event.
And The Great British Rhythm and Blues Festival will this year play host to the British Blues Awards, hopefully bringing even more people to the event.

The British Blues Awards recognises the best of Blues music, musicians and festivals in 15 different categories, including British Male and Female Vocalist, British Blues Band, British Instrumentalist and British Young Artist. The awards will be presented on the British Stage on the Sunday afternoon.

BBC Radio Lancashire will once again be broadcasting live from the British Stage at various times over the weekend.
Festival organiser, Alison Goode, said:
“The Festival is now in its 24thyear and continues to pull in the crowds, which is a fantastic achievement. We look forward to welcoming back loyal supporters who return year after year to enjoy four whole days of live music, as well as those visiting for the first time.
“Every year we try to cater for all musical tastes and again, we are really excited by the line-up we have already secured.
“Also for 2013, we are proud to be hosting the British Blues Awards, which will hopefully bring more –and new - people to the Festival.
“And let’s hope 13 will be a lucky number for us and we get some good weather to add to the terrific line-up and create the fantastic buzz and atmosphere this Festival is known for.”

For a full line-up, to find out more and to buy tickets, visit