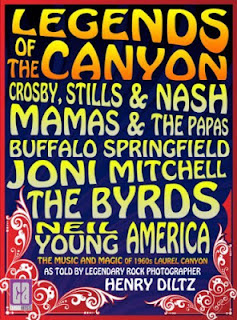 Following the critical and commercial acclaim for 2012’s “BB King, The Life Of Riley”, Producer/Director Jon Brewer returns with the imminent release of the “Legends Of the Canyon – Directors Cut” film through Universal Music.

'Legends of the Canyon' delivers the story of how rock music spawned in the garden of the Hollywood Hills, Laurel Canyon. Many of rock music’s legendary artists of the late 1960' s brought to life the anthems of a generation in the commune-like setting of these hills. Crosby, Stills and Nash, The Mamas and the Papas, Joni Mitchell, America, Buffalo Springfield and many others feature.

Adding depth, colour and candor to the film, famed rock photographer Henry Diltz, CSNY official photographer, contributes as narrator and with a variety of original photographs, some never before exhibited, and rare footage shot amongst the tribe members of Laurel Canyon. Visually stunning, intensely captivating and musically inspiring this film brings us to a time and place where some refused to let go of the dream of a life where harmony ruled the Earth. Their music still echoes through the world today…

Henry Diltz will be coming to the UK in May to promote the release. May will see an exhibition of Henry’s work and a select theatrical run for the film. Details tbc