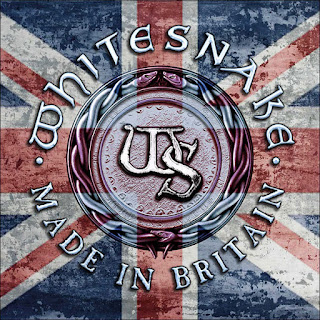 Frontiers Records is pleased to announce Whitesnake's explosive new double live album – Made In Britain/The World Record – officially released as a 2CD set in the UK on Monday 8th July (European release is Friday 5th July).
The live release coincides with the news of Whitesnake's UK Arena Tour with Journey and Thunder which kicks off at Glasgow SECC on Saturday 18th May.

During 2011 the mighty Whitesnake embarked on one of their most successful world tours in recent times, performing 96 shows in over 35 countries, starting in North America in May right the way through until the 2nd UK run in December. The request for another live album came from Whitesnake’s incredibly loyal fans - never ones for being notoriously shy about insisting what they want from their favourite musical reptiles. Before heading out on the Forevermore World Tour 2011, the decision was made to record every performance on the tour.After spending the early part of 2012 feverishly editing and mixing the Whitesnake: Made In Japan DVD, the production team consisting of The Brutal Brothers, DC, Doug and Mikey Mac, had the task of listening back to over 90 shows and 130 hours of 100% raw, muscular Whitesnake performances began in earnest.


Inspired by the performances from the 9 sold out UK shows and a further 87 performances from around the world, the live albums Made In Britain and the accompanying The World Record were born.
The recent Forevermore songs shine as brightly as the classic Whitesnake songs, Is This Love, Still Of The Night and Here I Go Again, all performed with feverish energy, encouraged by remarkably enthusiastic audiences from Newcastle to Sao Paolo.

Once again, Whitesnake have delivered the goods that fans new and old, have been clamouring for. Make no mistake; this is Whitesnake at their finest and most electrifying. Now you can relive the energy, the passion, the brilliance of a band still as resoundingly relevant today as they have ever been. 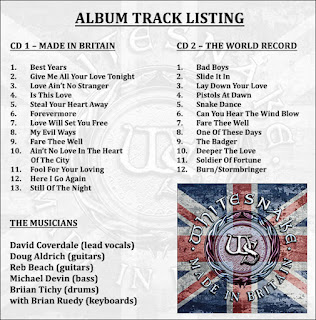