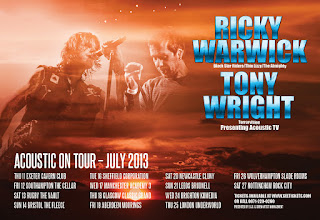 Acoustic On Tour
July 2013
Ricky Warwick is one of the UK’s best-loved rock frontmen. Coming to prominence with The Almighty, who released 7 albums in the 1990’s before disbanding in 1997. Ricky then went on to record several solo albums before becoming the vocalist with Thin Lizzy and now with the critically acclaimed Black Star Riders.
Ricky always loved playing acoustically and is set to head out on the road again to fill some downtime before the Black Star Riders touring machine hits the road in the Autumn of 2013. Acoustic On Tour is the first Ricky solo tour for two and a half years.

Ricky will be joined on Acoustic On Tour by Tony Wright, the lead singer with Terrorvision. Part of every rockers staple diet throughout the 90’s, Terrorvision released four classic albums and a host of Top 40 singles before going their separate ways. Since then Tony formed LaikaDog and continues to play with both bands. Tony will be presenting Acoustic TV alongside Milly (from Terrorvision) and exploring a host of old and new songs in the acoustic format.

Acoustic On Tour will be featuring classics from Thin Lizzy, The Almighty, Black Star Riders, Terrorvision and Ricky and Tony’s solo projects.