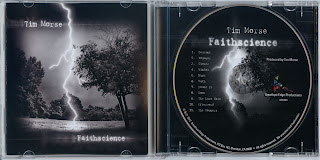 
I recently came across a new CD by Tim Morse. His name sounded familiar. In my library is a book Tim put together on the prog rock giants, Yes, written a little over ten years ago. I enjoyed the read so much that I remembered Tim’s name. Still I didn’t put two and two together immediately. The last name is, after all, common. Cracking open the disc and looking at the inside credits, I see at the top of a list giving thanks, a name I know all too well: Jon Anderson. Cool…two and two is indeed four. Same guy. I knew he was an author. Music- wise regarding Mr. Morse, I was clueless up to the point when I put Faithsciece in my CD player and pressed play.

Ends up besides being an author, that Tim Morse is a competent songwriter, vocalist, and a multi-instrumentalist. In the credits on Faithscience it reads; "Tim Morse -- keyboards, lead and backing vocals, all 12 string and six string nylon / steel string acoustic guitars, occasional bass, percussion and electric guitar." How impressive is that? Now that I heard Faithscience repeatedly, I can say that he plays all of them with proficiency. One example would be an instrument that defines prog rock, the keyboards. One listen to Faithscience and one can conclude Mr. Morse's playing skills would qualify him to be a wizard.
Tim’s resume also includes being a part of a very popular Yes tribute band called Parallels. Add to that, he put out his debut CD a few years back, which was very well received named Transformation (2005).
Faithscience starts off with one of the most infectious songs on the disc, Descent. From there it segments into the beginning of the second track, a tune called Voyager. This song almost immediately starts off with Tim’s first vocal appearance on the disc. I’m so hard on vocalists. No gray area with me. One is either good or not. Tim has a pleasant voice. I like his delivery. And away you go. After putting the CD on and before I even realized it, track four is starting to play. Give or take about twenty minutes, or a third of the CD has just flown by. A pleasurable listening experience saturated with a mixture of sounds reminding me at various times of Gerry Rafferty, Steely Dan, or The Flower Kings. By the time the CD is done, I've heard songs in the same vain as Genesis and keyboard playing very much in the ballpark of a Keith Emerson or a Rick Wakeman.

Track four is a stand out, lovely guitar piece reminiscent to one of the masters - Steve Howe. Very nicely done.

The centerpiece is a new prog masterpiece entitled, The Last Wave. Blows me away. Samples from metal prog to some cool rock prog jazz fusion. Containing wild tempo changes and various musical styles. The song is worthy of being a new musical business card for Mr. Morse. Well done indeed !!
Every song contained has something unique to it. Ends with a beautiful song that if you didn’t tell me, I would have thought it was something new by Vangelis (who is essentially retired). Older females might call this pretty music. The mellower ending helps balance out the disc. Good choice for a closing track.
Rating: On a scale of one to five stars, Uncle G gives Tim Morse’s Faithscience, five stars. It does its job, which when I’m reviewing something, is to entertain me. So much so I’m thinking I need to buy Tim’s first CD. I don’t want a missed opportunity on yet another masterpiece from a contemporary new prog artist. Time to backtrack some. And in the meantime I’m sure Faithscience will remain close to my stereo. Nicely produced and engineered with a clarity that enables the listener to zoom in on whatever instrument(s) is being presented. With Tim & Company, lots of good playing here to focus on.