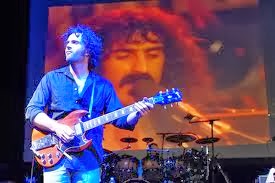 Following a highly emotional, and tearful performance of the iconic song ‘Watermelon In Easter Hay’, last week in New York City by Dweezil Zappa, Frank Zappa’s son. Dweezil has decided to add this iconic song to the set list on the Zappa Plays Zappa UK tour for 2013.

Taken from the 1979 album Joe’s Garage, it has been regarded by many to contain one of the greatest guitars solos ever recorded, and according to Dweezil it was “the best guitar solo his father ever played”.

This song of pure musical beauty will now fit alongside the 40th anniversary celebration of the pivotal Zappa fan favourite Roxy & Elsewhere.

Zappa Plays Zappa will hit the UK premiering songs that have not been performed on previous tours and cutting its teeth on additional surprise material. Dweezil says "The Roxy album has always been one of my favourites and I'm excited to play it top to bottom. It has a great balance of musical styles and showcases some of the funkiest grooves and most devilishly frenetic instrumental passages my father ever composed."


If you wish to find out more about Zappa plays Zappa, please visit the website links below for the band, and for Dweezil Zappa: