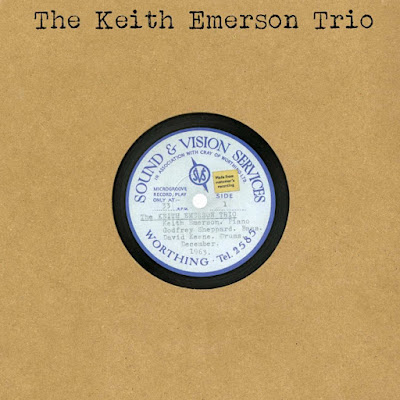 I luv a new offering with an interesting back story, and this archival release has just that. With only four known in existence, an acetate (instant recording … no edits like tape … commonly used for presenting demos) recording, of The Keith Emerson Trio, was recently found. Quoting from the liner notes; "…it was David Gaylor, who contacted me saying he has been rummaging through old records when … found an acetate that had The Keith Emerson Trio written on it."

And this is Keith Emerson narrating the story by the way. Songs performed by himself, Godfrey Sheppard (bass), and David Keene (drums). Recorded in 1963, this now newly sanctioned product for the masses, would make Keith still a teenager. In the painting world this would be akin to checking out the early drawings of H.R.Giger, or Peter Max (insert your own name of favorite painter here). Mr. Emerson is quoted again from the liner notes; "Now we all have to start somewhere..."

I became aware of the legendary piano / keyboardist, prog-rocker Keith Emerson via the radio waves. Stations like WPLJ FM, or WNEW FM, both out of the city that never sleeps, New York City, and their playing of ELP's first hit; Lucky Man (1970). Found on the group's debut album. It wasn't so much the actual song, but Keith's solo towards the end of the tune, played on a Moog Synthesizer that caught, and held my attention. Myself, and millions of others as well. When able, I'd play that part of the song as loud as those surrounding me could stand it. Still do to this day. So feel free the next time you hear that classic, to crank it up. Volume to eleven! FYI: A possible cool way to blow out older speakers. And if that don't do the trick, try this Keith Emerson penned composition; Tank. Found on Emerson, Lake, & Palmer's 1970's self-titled debut album, along with the already mentioned 'Lucky Man'. And if I may say, such a solid first release by the long established super prog group. If not already in your classic rock collection, one should get it at first opportunity. Play it all day. Preferably in a place where weed isn't illegal. Produced by Greg Lake.

More about Keith. I feel it's important to acknowledge the experience, and expertise that one gets from devoting oneself to a craft. Keith Emerson had certainly paid his dues, and deserves every ounce the respect those in the know, bestow upon him with each passing day. He's been a musician all my life. Congratulations for doing that. The music he involves himself with, a positive part of my existence.

As far as getting to know Keith's vast body of work, and two of the biggest bands he was in, I became a Emerson, Lake, and Palmer fan first, and then a more casual fan of The Nice after. For those not aware, The Nice is the keyboard driven rock band, Keith was in, before ELP. So for the record, I wasn't a fan of The Nice first, but the other way around. Because of my age. I discovered ELP as a young teenager. By that age, I already established what my two favorite forms of rock music were, with that being, art rock and hard rock. Bands like Alice Cooper, Yes, and Led Zeppelin rung my bell the most. Emerson, Lake, & Palmer came in second, to my being into Yes the most. Was into Pink Floyd, Genesis, and a host of others that I write about on a semi-daily basic for ClassicRockRadio.co.uk ... hope I'm not looking back to fondly, but the nineteen sixties to the nine nineties was an excellent time to be a fan of music.

My mother was a professional musician. Died young, and left a huge influence on me. Music is in my veins. I was weaned on Herb Alpert and The Tijuana Brass. My mums favorite. Not surprising to anyone who knows me, and it could be because of this, that I seriously dig instrumental music. Many of my close personal friends have heard me discuss the merits of even having a vocalist in a band. Instrumentally it could be rock music based, or a cool score to a film, or television program. Jeff Beck's Blow By Blow (Jazz Fusion_Instrumental Rock) is one of my all time favorite records. I'm also into TV Theme Songs … go figure.

One of my first impressions when I first started playing The Keith Emerson Trio CD that arrived in my snail mailbox one day, was that bassist Godfrey Sheppard's work is absolutely amazing. Am more appreciative of this fact with each and every listen. The dude plucks and bows with the best of them. This in turn makes you think how crazy good the drummer, David Keene is. Sets pace, and playing already, like an old time professional. All three determined, focused, young, and full of … energy. All these things come to mind when their music is playing in the background.

For ELP related collectors (meaning whatever each of the three do individually, and not together as a group), there is a hint of playfulness to Keith's sound, and a few notes sprinkled throughout that ELP fans who really know Keith's parts, will recognize, and deem it worthy for collection. So if into Mr. Emerson's entire catalog, which would include his solo stuff, film work, and 3 … awesome band, as was Emerson, Lake, & Powell. ALL GREAT stuff! Then, The Keith Emerson Trio CD / album (limited amount pressed) is an automatic buy, in whatever format you dig most. In 1963 music of this type might not have been all the popular trend, but it did have it's place. In smokey rooms where people said words like, groovy. In today's world, what I hear most is that good music is good music, in whatever form available. Even on a recording that usually self destructed as time played on. I'd be excited finding a recording of the Keith Emerson Trio at a yard sale as well. Thanks for the keen eye David Gaylor!

Sound Wise: Check it out. The best stereo system in the world, and this will sound like it was recorded in someone's living room, circa; 1963. And as a matter of fact, it was. Liner notes say it was captured right there in what was then, Keith's house. Whereas the source isn't a vinyl record, it's remarkable that fifty two years later, that the sound quality is as good as it is.

The Band: They sound extremely well rehearsed. Again, hard not to be impressed by the playing of the bassist (Godfrey Sheppard) and drummer (David Keene). Remember, it's my interest in Mr. Emerson that motivated me to open this CD to begin with. Any musician who can keep up with, and even out shine Keith from time to time, is well worth remembering in my book.

Uncle G Rating: Using the ever popular five star rating system, whereas one star means the recording sucks (and not in a good way), to five stars which means it's safe to spend your disposable cash on, Uncle G gives The Keith Emerson Trio archival release; 5 stars! A LOT of fun! A must have for every Keith Emerson collector. Worth repeat plays for sure.