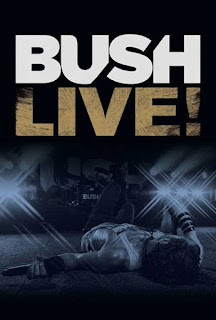 BUSH to release brand new live DVD and Blu-ray “Live!”
via earMUSIC on March 4th, 2013
earMUSIC announces the release of “Live!” on March 4th, 2013, a DVD and Blu-ray package from British alternative rock band BUSH.
With over 16 million albums sold, BUSH is one of the most successful alternative bands of the past two decades. Led by charismatic frontman Gavin Rossdale, BUSH is going strong after a 2010 reformation.

Their most recent album, “The Sea Of Memories” (2011), charted all over Europe and was followed by an impressive series of acclaimed tours; the band has been on the road constantly throughout 2011 and 2012. One sold out date after another showed a band enjoying being on stage, while delivering a powerful and emotional live performance night after night.

The centrepiece of “Live!” is a full-length concert, filmed at the Roseland Theater in Portland, Oregon (USA) in the fall of 2011. Live From Roseland is the first concert performance from Bush to be released on Blu-Ray and DVD. A special CD+DVD will also be available for a limited period, which will include the European Limited 2CD Edition of the studio album “The Sea Of Memories”.

The 90 breathtaking minutes that form Live From Roseland include all-time favourites like “Glycerine”, “Everything Zen” and “The Chemicals Between Us”, as well new hits “The Sound Of Winter” and “All Night Doctors” from “The Sea Of Memories”. A show highlight is the extremely powerful “The Afterlife”, during which Gavin Rossdale gets up close and personal with the audience, singing as he makes his way through the crowd and around the entire theater.

Equally exciting is the bonus content featured on “Live!”: “On The Roof” is a stripped down, 5-song acoustic performance, filmed on a magic night in Berlin for the interactive music channel tape.tv.
The official music videos for “The Sound Of Winter” and “Baby Come Home” are also included, and complete the offer for band completists.

For a first glimpse of the powerful live performance of “The Sound Of Winter” from Live From Roseland, please head to: http://youtu.be/8nRKNiWXWRw
Posted by Jon Kirkman at 16:32