Thn Lizzy: The Boys Are Back In Town: Scott Gorham and Harry Doherty 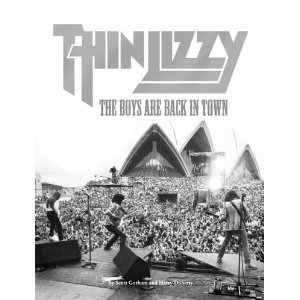 Published just as Thin Lizzy are embarking on their farewell tour although the farewell might not be as final as you think.

What we have here is a fantastic softback book that covers the Lizzy story from the perspective of one of the major players, in this instance Scott Gorham. To lend a little balance and cover an earlier period and of course some perspective from outside the Lizzy bubble we have journalist Harry Doherty who has been covering all things Lizzy since the seventies and was even asked by Phil Lynott to write the official biography in 1977 so certainly someone who was well versed in Thin Lizzy.

The book is an immensely honest account of the band from the inside and also the outside from harry's point of view particularly the downfall of the band which as everyone now knows was down to drug abuse and sadly Phil Lynott's inability to address the issue which ultimately cost the man his life. He even told harry Doherty once that he had given up drugs. Of course sadly this was not the case
Throughout the text it seems that Thin Lizzy were just on the edge of success in America when of course something would happen to stall the band's success from Phill going down with hepatitis  through Gary Moore leaving during the tour and then of course Phil and Scott's drug addiction.

The bottom line is that the band should have been huge but throughout it seems that Phil Lynott was his own worse enemy. Having said that he was an incredibly likeable man and of course had a fine ear for a song.

From what I have been told the first two editions of the book are sold out and we are into the third print. I am not surprised because Thin Lizzy were the soundtrack to many people's lives and the legacy lives on both in the memories of the concerts including recent concerts from the current line up of the band led by Scott Gorham and of course the music.

This book is well presented and contains an amzing tale of rock n roll behaviour and how a band who really should have been global superstars just missed out .....Boy did they give it a shot though.

Plenty of amazing photographs highlihght the text throughout with many to my eyes previously unseen, making the book the "Must have" Rock biography of the year and a Must Have for Thin Lizzy fans of all ages.