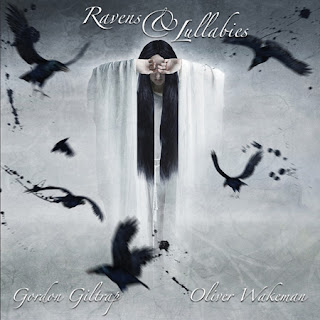 Gordon and Oliver spent 2012 writing and recording the album which features a return for Gordon to his rock roots following a 30 year absence and Oliver's first recorded works since his departure from both Yes and Strawbs. The album has been recorded and mixed by 'Threshold' guitarist Karl Groom (who also mixed the Yes 'Live In Lyon' record which featured Oliver on keyboards). This limited signed 2 disc edition features a Bonus CD of live recordings taken from Gordon and Oliver’s 2012 tour and re-recordings of pieces from Oliver and Gordon's past catalogue. Ravens and Lullabies sees a host of respected musicians joining Gordon and Oliver in the studio.

Vocalist Paul Manzi has performed with the Oliver Wakeman Band for the last 6 years (appearing on the live DVD 'Coming to Town') and is the current vocalist for the rock band Arena. Steve Amadeo is an in demand Jazz/Blues/Rock session bass player, is currently performing with Blues guitarist Aynsley Lister and Johanne James has been the drummer for Threshold for the last 12 years.

The album also features a special vocal appearance by Benoit David, Oliver's old band mate from Yes, on the track 'From the Turn of a Card' written by Oliver during the Yes recording sessions of 2010. Gordon Giltrap says "Working with Oliver is like a breath of fresh air. I knew of his reputation as a fine musician, and it made perfect sense for me to tap into his creative energy, not only to bring out certain elements of my musical gifts but to create something new and exciting, whilst giving a nod in the direction of our respective Progressive Rock roots".

Oliver Wakeman adds, "After working with YES, the chance of working with another legendary artist was an opportunity too good to miss. I am having a wonderfully productive time working with Gordon and feel we are creating something genuinely unique in our 'Ravens & Lullabies' project."

Many of Gordon's fans have been asking for years when he is going to return to his rock roots and others wondered what Oliver would write after the Yes experiences. 'Ravens & Lullabies' provides the answer.

There will be two different releases of the album and details of Pre Sales will be announced shortly .

Live Recordings Taken From The 2012 Tour:
1. Nature's Way
2. Isabella's Wedding
3. Progress of the Soul
4. On Camber Sands
5. Lutey and the Mermaid