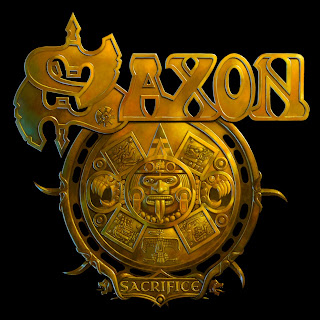 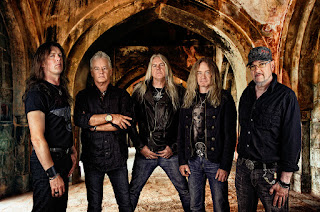 WITH A storming new stomp in their boots and a renewed, lithe swagger to their legendary sound, Saxon will release  “Sacrifice”, on 25th February 2013 through UDR Records. Taking a sharper, re-invigorated approach to the production, on this, their 20th album, Saxon have produced 10 of their strongest, heaviest and most inspired songs for many-a-year, and a more than worthy successor   to their last album  “A Call To Arms”.  “Less tricks, more power!” roars frontman and founding father Biff Byford,

“my brief to the band was to be raw, be real and not be afraid to look back at the old classic  material  for inspiration.”

The album was recorded at LS Studios in Yorkshire and was produced by Byford with Andy Sneap mixing and engineering  by Jacky Lehmann. It fairly bristles with muscular metallic intent, Paul Quinn and Doug Scarratt’s guitar work the best it’s ever been, while Biff’s vocals sound fresher and livelier. The songwriting too harks back to a classic era in Saxon’s history, with the likes of ‘Warriors Of The Road’, ‘Wheels Of Terror’ and  ‘Stand Up And Fight’ evoking the  halcyon days  of yore with a contemporary  twist, the  classic  Saxon sound  absorbing  the  snarl, ferocity and attitude of contemporary bands (and fans) such as Megadeth, as evidenced by the crunching title cut ‘Sacrifice’.

“It’s certainly been done from a more early ‘80s thrashier perspective,” explains   Biff,  “and it’s not just guitars bashing away willy-nilly, they’ve got a fresh drive, purpose and perspective.”

Besides the new material, Saxon will also be adding some unique recordings of revisited classics to certain formats of the release, also produced by Byford and mastered by Andy Sneap, including an orchestral version of Crusader and an acoustic version of Frozen Rainbow.

“From the songs to the production, I wanted to focus on the raw aspects which made us great In the first place,” concludes Biff, “And living in that rawness, combined with some great classic Saxon-songwriting, has in my opinion, made Saxon fresher than ever.

Luck Of The Draw (on iTunes Only)

Saxon also embark on an extensive UK tour in support of the album with the tour commencing in April continuing through May. Full dates at the time of press are listed below.

Tickets for all venues are priced at £18.50 except for London* where they are £20.00 (all subject to booking fee).   Tickets available at Kililive.com Tel: 0844 871 8803 and usual outlets.  Doors for all venues open at 7pm.
After more than 35 years and 13 million albums sold worldwide, Saxon are still relentless and passionate as they were back in the days of ‘Wheels of Steel’ and ‘Denim and Leather’. The influential heavy metal outfit has been an inspiration for the likes of Metallica and Megadeth and a front-runner for the New Wave of British Heavy Metal sweeping the nation in the late 70s-early 80s.  New Studio album ‘Sacrifice’ out on February 25th, will be album number 20 in their stellar career, and fans are as excited as they were when Saxon first made their initial impact on the metal scene. 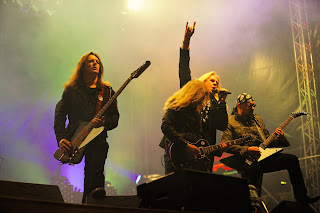