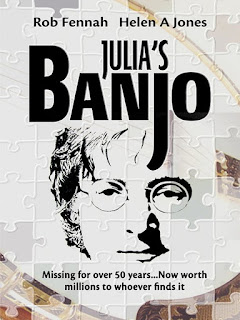 "When Beatles tour guide Barry Seddon finds a letter written by John Lennon he unearths a clue to solving the greatest mystery in pop music - the whereabouts of Lennon's first musical instrument...."

Thus starts the search for probably the rarest piece of Rock Music memorabilia.
Whilst the story is completely originbal the facts are true. John Lennon did learn to play on his mother's banjo hence the title "Julia's Banjo". Even Paul McCartney noticed on their first meeting at a Woolton Church fete that John played banjo chords on his guitar

The story is quite believeable and of course as many people will tell you that if "Julia's Banjo" could be found? It would of course fetch a ridiculous sum of money on the open market if it were ever sold. One could even imagine both Yoko Ono and Paul McCartney bidding against each other for this priceless piece of musical history. To suggest that this instrument would be akin to the Holy Grail would not be far from the truth for those people who deal in instruments like this

So is it real? Well reading the book the story certainly is entertaining enough but always at the back of your mind you start to think about the "What If's"

Julia's Banjo is the first novel or work of "Faction" if you like from Rob Fennah and Helen A. Jones and if I were a betting man I imagine that this book could lead to a film of the same name and cewrtainly with the Beatles still commanding everyone's attention why not. It is an excellent story and one that has its feet partially at least in the real world.

Read the book and let your mind eander
More details available at the "Official" website
www.juliasbanjo.com
or you can buy the book both as a paperback or eBook from Amazon
http://www.amazon.co.uk/Julias-Banjo-Rob-Fennah/dp/1479392987/ref=sr_1_2?s=books&ie=UTF8&qid=1353712505&sr=1-2