L.A. GUNS TO RELEASE LIVE IN CONCERT, FROM M3,WITH BEHIND-SCENES AND INTERVIEW EXTRAS ON FEBRUARY 12 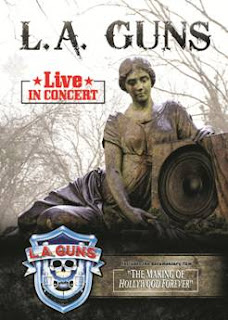 L.A. Guns provided one of the most talked-about performances at the 2012 M3 Rock Festival in Maryland last May. That full concert was professionally captured in a multi-camera shoot and packaged with behind-the-scenes, studio, and interview extras in L.A. GUNS: LIVE IN CONCERT to be released February 12 by Cleopatra Records. Also included are three studio music videos from the critically-acclaimed album, HOLLYWOOD FOREVER. The accompanying CD provides the audio tracks for the M3 concert.

L.A. Guns continues carry the torch of the glam/sleaze/rock scene from the Sunset Strip, always delivering their trademark sound, but also creatively moving forward with the type of exciting new music displayed in HOLLYWOOD FOREVER. It is this combination of old and new that keeps L.A. Guns on the road, on the radio, and on the minds of rock fans across the globe. L.A. GUNS: LIVE IN CONCERT captures the band at one of the biggest rock festivals in the U.S. and showcases the fan favorites like “Never Enough” and “The Ballad of Jayne” as well as tracks from the new record. The concert is uncut and has material not seen in the live festival feed.

L.A. GUNS: LIVE IN CONCERT will be in stores and online


http://www.facebook.com/officialLAGuns
Posted by Jon Kirkman at 22:50