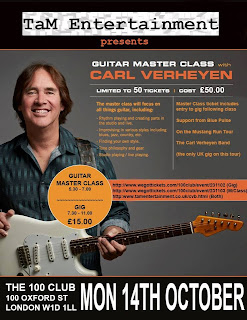 Carl Verheyen - guitarist with Supertramp - is in London on Oct 14th on the only UK gig on his Mustang Run tour. Prior to the gig at the 100 Club Carl will be giving a guitar Masterclass.

Carl is credited as being in the top 100 guitarists of all time and currently among the top 10 in the world. Tickets for Masterclass/Gig or Gig only are available from:

Carl will be talking to Jon Kirkman on Jon's Saturday afternoon programme on Saturday August 10th between 4pm and 5pm UK Time
Posted by Jon Kirkman at 14:55