On World Lion Day adopt a lion - they rock


.In 1964, Bill Travers and Virginia McKenna travelled to Kenya to star in the classic wildlife film ‘Born Free’, based on the best-selling book by Joy Adamson.  Released in 1966, the film told the true story of George and Joy Adamson’s fight to return Elsa the lioness to the wild.  Few who have seen  Born Free could fail to be moved by this story

The Adamson’s story was enjoyed by tens of millions around the globe, capturing hearts and inspiring a generation. It changed the world’s attitude to lions forever.  Making Born Free profoundly affected Bill and Virginia.  Working with George and Joy influenced the rest of their lives.  Their close contact with the lions sparked a lifelong commitment to wildlife and they realised wild animals belong in the wild, not incarcerated in captivity.

From small beginnings, the Born Free Foundation has grown into a global force for wildlife.  A personal passion for wild animals and desire for positive change remain at heart.  Described by The Times as ‘Big enough to make a difference, but small enough to care,’ Born Free is not a big anonymous organisation, but a family of like-minded people who share the same goals.  They work to prevent individual animal suffering, protect threatened species and keep wildlife in the wild 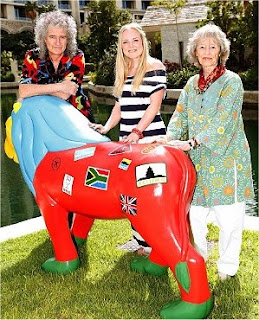 Brian May, Kerry Ellis and Virginia at the Pride of Cape Town There are many ways to support the Born Free Foundation, but did you know you can also 'adopt' lions and lionesses through them? (as well as many other amazing animals ) 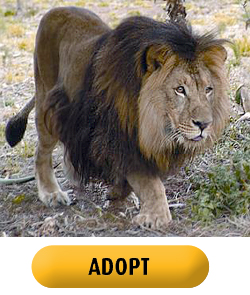 Adopt Sinbad for just £30 a year and help fund his daily food and care AND support big cat protection worldwide.  You’ll get a great Gift Pack too!

You can also find out more about (and support!)  World Lion Day  here    http://worldlionday.com/     ( find on Twitter: @worldlionday ) 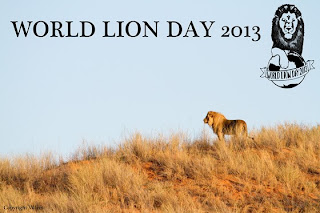 Despite the lions’ symbolic importance throughout the ages on coins, flags and statues, across Africa and India they are suffering from a silent extinction

The main threats to lions occurs when they run into conflicts with humans. Through the years lions have been killed for  so-called 'sport', and are still sadly prized as big-game 'trophies' by trophy hunters.

Habitat loss from agriculture and  logging has also affected the lions

Lions have vanished from over 80 % of their historic range and currently exist in 28 countries in Africa and one country in Asia (India). They are extinct in 26 countries.  Only 7 countries:  South Africa, Botswana, Ethiopia, Kenya, Tanzania, Zambia and Zimbabwe are believed to each contain more than 1,000 lions and the numbers are falling.

Africa without lions? Extinction a real possibility? I can scarcely believe what I’m writing. But the species is on the brink of destruction. Could this be the lion’s last roar? - Virginia McKenna

I was not the lion, but it fell upon me to give the lion’s roar” Winston Churchill,


“The lion is beyond dispute, allow’d the most majestic brute; his valor and his generous mind, prove him superior of his kind” John Gay, poet, 1685-1732 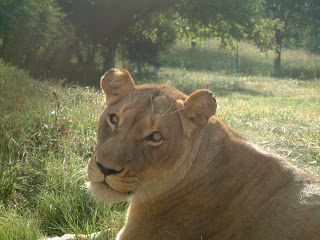 one of my lioness friends, a true beauty, as nature intended - photo Marilyn Michaels