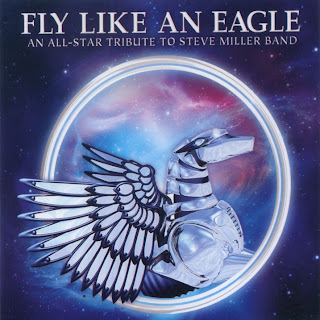 If anyone deserves a tribute from the world of classic rock, it’s the Steve Miller Band. I was first turned on to them back in the year 1973, with a song entitled "The Joker". Back then, I was a teenager and living in a small Jersey Shore town called Manasquan. Already having the music bug, I was regularly listening to radio stations out of New York City. "The Joker" was a HUGE hit and played in very heavy rotation. Its popularity never stopping. Forty years later, the song is still played multiple times every day on music stations around the World.

I remember seeing the album Fly Like An Eagle on display at music store Sam Goodies. Just released and on sale for a whopping $4.99, in which I got every penny's worth, having played the album to death. One of Uncle G’s all-time favorite rock albums. I now have it on CD that was packaged to look exactly like the album, back in my high school years. Comparatively, the CD is MUCH smaller in size, but a cool reproduction none-the-less. I could play the CD as loud as its wax counterpart, if not louder. Every song is one you want to crank up. And speaking of which, so is this new Purple Pyramid Records tribute; Fly Like An Eagle – An All-Star Tribute To Steve Miller Band.

An extraordinary collection of not only popular songs from the Steve Miller Band history, but other American hits as well. Miller himself even spotlights the U.S. with an original composition and one of the bands many greatest hits, "Living In The U.S.A".  As a professional musician, Miller knew how to write a solid song with a catchy melody and then give it words the average person could identify with. Other songs containing lyrics about what young males fancied most: driving automobiles and the female species. The lyrics to "Abracadabra" mentions, "black panties and an angel's face." Both songs mentioned here are performed on this CD by the way.

Now let’s look at the words: All-Star. Good Lord…if you're a prog-rock fan, you hit the jackpot with this CD. These are some of the most memorable performances ever recorded. Sounds too good to be true, you say? Probably is, but this one's good enough that an average opinion after hearing one of these re-imagined compositions would leave an overall positive impression.

I have never liked a tribute / cover album to sound exactly like the material that is being performed. Just don’t see the point. I’d rather spend my time listening to the original recording. Yet, there are magical times when a cover song attempts to even outshine what was first presented and liked to begin with. One definition of a well-composed song is that it can be played in various styles, but staying within the borders enough so folks at least recognize it. Each artist here does exactly that.

One example is Yes’ ex-keyboardist, Mister Rick Wakeman. His contributions on the song "Abracadabra" matches some of his best original solo work. Not only is Wakeman’s effort out of this world, but the work of his fellow musicians on the track is, as well. First off, on 'Abracadabra' a wonderful vocal performance by Martin Turner. Next and not least to be credited on the cover is Billy Sherwood, ex-Yes and original member of Circa with Tony Kaye, original keyboardist for Yes and now also not currently playing for them either. And who just also happens to be on this album, plays EVERY OTHER SOUND heard including drums, incidental keyboards, guitars, and bass. The CD was also recorded, produced, and mixed by Billy Sherwood at his Circa HQ Studios in sunny California, U.S.A.

Interesting Note: On Purple Pyramid Records Fly Like An Eagle; An All-Star Tribute To Steve Miller Band, Tony Kaye actually has the honor of being the only keyboardist not to share a track with another keyboardist or even two, on the disc’s first track, "Take The Money And Run". What you'll hear is one of the best Hammond organ players on this planet. Now, this is according to the credits that came with the CD. Regarding Sherwood again, job well done for seemingly being the glue holding this project together.

The reasons why one may be interested in hearing this disc is many. Knowledgeable and skilled musicians associated with a solid record company who dig putting out these kind of music CD's is one of them. GREAT subject matter. Those already a fan of the Steve Miller Band would be interested in the different takes of many of their greatest hits. Good choices on song selections and what musicians play on each track.

Other standout moments from Fly Like An Eagle - An All-Star Tribute to Steve Miller Band include:

Peter Banks on one of his last recorded sessions before passing away this last March. A somber and also haunting version of the Steve Miller written "Winter Time," accompanied with beautiful vocals by Sonja Kristina.

Rod Argent and Steve Hillage totally make their own of SMB's classic, "Rock ‘n Me".

The prog-rock legends Nektar help close the disc along with Geoff Downes and Joel Vandroogenbroeck, performing what I already said was one of my all-time favorite albums, Fly Like An Eagle. It’s also the title song to this very well done, tribute CD. But I miss hearing 'Space Intro' beforehand. Miller shined with that. You'd think with all these extraordinary keyboard players listed on this tribute, that one would have liked having fun putting their own spin on it. A missed opportunity.

Rating: Either something missed or not exactly right, using the one to five star rating system, Uncle G gives Fly Like An Eagle – Am All-Star Tribute To Steve Miller Band, 4 and a half stars. It was the general census with others who I played the CD for, and I tend to agree.
Gary Brown
American Corespondent for Classic Rock Radio Dot EU