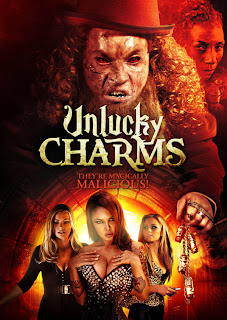 I viewed the newest movie from Full Moon / Charles Band called Unlucky Charms yesterday. A well done B movie horror-fantasy film telling the tale of a woman celebrity obsessed with beauty. Around long enough to establish a successful career, she now finds herself having a hard time holding on to what helped made her popular in the first place. For what she treasures most of all is something that as a rule fades over time. Nothing a little magic can't fix, or can it?

Welcome to the independent film studio Full Moon and of mega successful B movie producer, Charles Band. A director at times, Band's behind the lens again with Full Moon's latest offering; Unlucky Charms. Charles states while doing promo for this film, that this new movie reminds him most of another movie he was a part of creating; Troll (1986). A very successful film for Band that when it comes to working with people, included a portion of the small people community. If not PC enough; the horizontally challenged. In front of the camera portraying creatures both good and very, very bad. From the film Unlucky Charms may I introduce our four main mythical beings; The Cyclops, The Banshee (cool character), The Hobgoblin, and our star, the mischievous, Leprechaun who dresses in the color red, Farr Darrig.

The movie starts off with a cool fantasy dream-like segment. Then we see the opening credits. Brings to mind some honorable mentions including the music score by Charles Bands brother, Richard. A wonderful composer of film music who with Unlucky Charms does yet another brilliant job providing just the right musical moods to fit the compelling story.

Another name worth mentioning from the credits is Danny Draven who edited the film. I noticed when viewing that Unlucky Charms runs smoothly throughout. The motion picture runs tight and is presented very well. Nothing visual or audio to distract or take away from the pleasure of watching the film.

Directing is Charles Band. I first saw his work back in the early 1980's and a film he directed then staring an unknown Demi Moore called Parasite (in 3D). In the 1990's and the availability of his films on VHS I started to get to know his vast body of work. Can't say I like or that I seen everything with Band's name on it. The film titles he's produced alone is well into the hundreds. My passion is independent B horror and sci-fi film, and making a long story short, Band has created several that I really enjoyed over the years. Another enjoyment of mine is Band has also taken on comedies with elements of horror. His newest franchises Evil Bong, and Gingerdead Man is both getting good reviews.

Back to Unlucky Charms, Band does an outstanding job on this one. One can tell from viewing that everything wonderfully just fell into place. An eye catching location, well done special effects, and a bright youthful cast. More recognizable names then usual for a Full Moon production.

One stand out performance for me was Unlucky Charms leading lady; Jeryl Prescott Sales. Listed in the ending credits playing a duel role, and I must say, doing so very convincingly. Jeryl Prescott Sales owned her portrayal of the main character in the movie as she did when having roles recently in televisions popular serial drama's, The Walking Dead and Revolution.

Rating: Using the ten star rating system, Uncle G gives Full Moon / Charles Bands new film Unlucky Charms, a solid 10 stars. For an independent B horror film it contains everything I'm looking for. I was very entertained sitting down and soaking it all in. Keep in mind, this is more a good time for teens and up. Includes some nudity that I'm sure was essential in moving the story forward. Also, we get a matter of fact weed mention at around the twelve minute mark.

Note: As a reviewer I like keeping things on the level. Lucky Charms is a independent straight to DVD B Horror / Fantasy movie. When reviewing I'm NOT comparing to BIG Hollywood type films. Financially speaking, it's not the same playing ground. If I am comparing then I'll do so with other film companies that produce the same type quality movies as Full Moon does; The Asylum or Troma (just to name a couple). Explains my TEN star review. Movies like these in my opinion are meant to entertain. Lucky Charms does just that. Congrats to all involved in making this very fun motion picture.

In closing I'll leave with a quote from Unlucky Charms. The producer tells the young ladies that his door is always open (should they need his guidance or assistance) in which our other male character replies; "Yes and so is his fly."

Unlucky Charms is CURRENTLY available at your nearest Redbox Machine and through Full Moon themselves. Score another one for the independents.