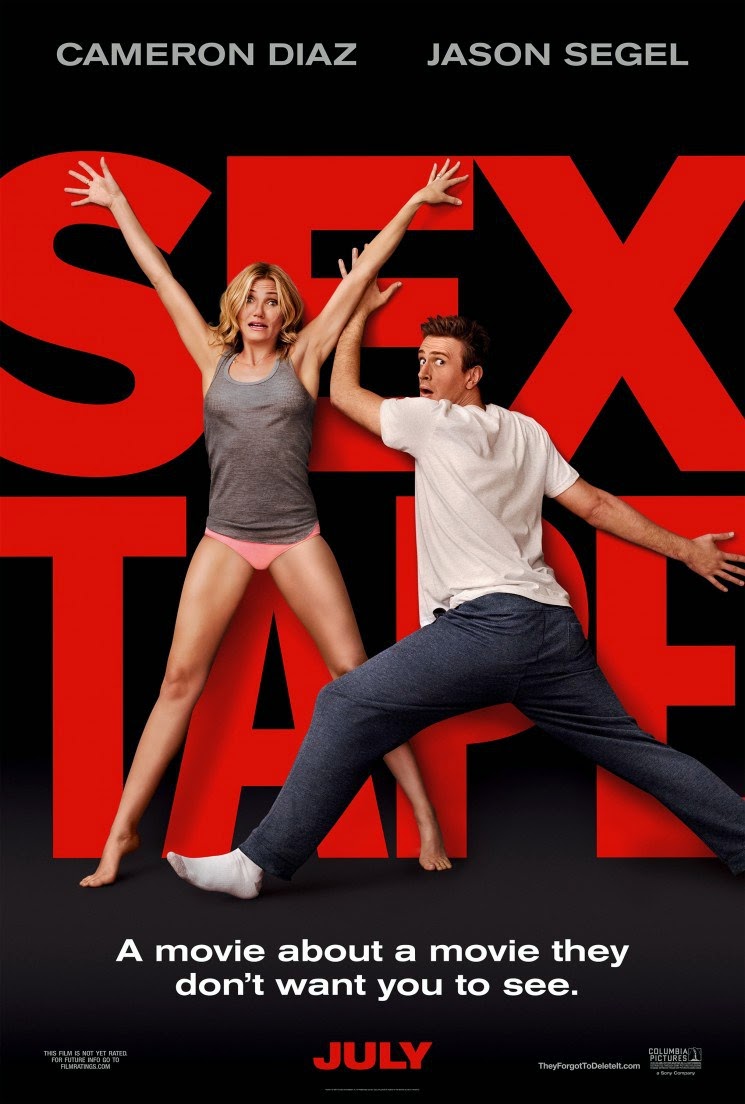 The purpose of leaving the house and spending what little disposable income one would have nowadays to see a movie, is to be entertained. Have a little fun escaping reality, and sweating out the new crop of monthly bills. This past weekend the big movie at the box office was about a bunch of pissed off monkeys. Deciding to skip that, my lovely wife and I went and saw the new R rated Cameron Diaz comedy; Sex Tape.

For the most part, the sex comedy played good throughout. Cameron Diaz portrays a early forties married mother, with her on screen husband played by Jason Segel (best known for the comedy TV series; How I Met Your Mother). Add two kids, and pop them down in a typical working middle class neighborhood going through the everyday ups and downs of trying to make a living, and raising children. A situation, many couples known all too well. Throw in stress and pressure, and what use to be a super active sex life for our star couple, is now just pleasant memories. When the problem is realized, the solution when set free becomes...the main topic for this adult comedy.

I grew up in the late seventies, and early eighties watching R Rated sex comedies being broadcast from something new at the time, called; CABLE TV. Real late at night, I'd come home drunk / stoned or both, turn on the boob tube, and find...naked female boobies ! Of course better in real life, but I was married and besides going to a strip bar, this was as real as it was getting for me, at that given moment. Many other males can identify I'm sure.

A couple of my favorite sex comedies would be, Porky’s, and the only cheerleader film I'd still watch to this day called; HOTS (Google it). Both were hysterically funny, and had females over the age of 18 in various forms of undress. Laughs and nudity. Sometimes both at once. Enough to make a guy pop his cork, should he not be able to contain himself.

Over the decades Hollywood changed. What they call raunchy comedies nowadays are usually nothing more but yet another platform for toilet humor, specifically aimed at those, fourteen years of age. Nothing really worth going to a theater, or even driving to the nearest Red Machine for. So when I heard about Sex Tape, I decided to make it a date night for my wife and myself, and off we go, in search of a good time. Since March we experienced two medical operations for myself, and a move to a house 20 miles from where we previously were. If anyone deserved a good time out for a few hours, it was us.

For the record, I hate porn. Too many negative vibes for me personally. Nudity on the other hand I'm cool with. As long as no one is being taken advantage of, or hurt in anyway, then...what the hell. Human beings are after all for several stages of their existence, all sexual creatures. Watching a otherwise normal middle age couple, reenact the Joy Of Sex book from decades ago...funny premise. In a world of fancy technology, where major occurrences happen by just moving a cursor over something and going click, mind blowing situations can occur, in the blink of an eye. As is what happened in the new movie, Sex Tape.

Regarding the actual nudity, it's not over the top. Expect to see bare butts, both male and female. Besides that, I don't consider something like side-boob a big deal. Other parts are covered in creative ways, and done so for a more comedic effect. So no full frontal !! Nothing to panic about. It's OK, for it's the story and acting that carry the film anyway. As a matter of fact, one of the funniest parts involves Cameron Diaz's dressed co-star and a dog. Serious, laugh out loud moments. Which is what the other people in the theater were doing, besides us. Several times throughout the film I noticed that happening. Sex Tape also has an interesting supporting cast of characters with some portrayed by familiar faces; Rob Lowe (hands down...excellent performance) / that chick from TVs The Office (Ellie Kemper), and an un-credited actor by the name of, Jack Black.

Rating: Using the one to ten star count like they do on the IMDB (Internet Movie Database) website, Uncle G gives 'Sex Tape'....eight stars. I know...why not ten? For one, a scene where our two main characters are in a automobile alone, could have been presented better. Too much dialogue as well, that made me the viewer happy when it was over. So maybe just some tightening up? I will go on record saying that after having experienced the film, I summed it up to the misses saying that it was money well spent. We were long overdue ourselves of having a good time. Time spent decompressing from the previous weeks bullshit is important. And better going out to your local theater to see Sex Tape, then the computer generated popcorn flick with the damn dirty apes in it.